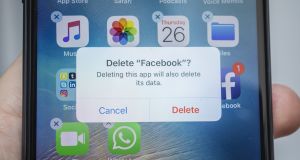 Facebook missed estimates and issued “jaw-dropping guidance,” as GBH Insights put it, saying profit margins would plummet from 44 per cent to the “mid-30s” for more than two years. Photograph: Johannes Berg/Bloomberg

It’s fair to say few investors foresaw last Thursday’s bloodbath in Facebook shares, when the stock lost $118 billion (€101 billion) in market value – the biggest one-day loss in history, easily topping the $91 billion lost by Intel on one day in September 2000, after the dotcom bubble had burst.

Markets didn’t it coming. How could they? Days earlier, shares in fellow online ad giant Google jumped after topping estimates and shrugging off concerns about the European Union’s General Data Protection Regulation. “Instagram is booming, and investors are salivating over Facebook as a result,” headlined Business Insider on Wednesday, citing bullish notes from Goldman Sachs and Deutsche Bank predicting a strong quarter based on partner checks.

Instead, Facebook missed estimates and issued “jaw-dropping guidance,” as GBH Insights put it, saying profit margins would plummet from 44 per cent to the “mid-30s” for more than two years. The magnitude of the growth slowdown “is beyond anything we’ve seen,” said one stunned Jeffries analyst during the post-earnings conference call.

What’s next? No one knows, but shareholders will be hoping management decided to play it conservative, to get all the bad news out there in one go. Facebook has a history of “resetting” revenue and expense expectations “only to turn around and exceed those expectations the following quarter,” noted Loup Ventures technology analyst Gene Munster. This conservatism was also noted by RBC Capital Markets, which advised investors to not “unfriend” Facebook.

However, note that markets typically underreact rather than overreact to unexpected earnings news; prices tend to drift in the direction of an earnings surprise over the following weeks and months, suggesting a quick rebound is unlikely.

Long stock market correction is over

The longest stock market correction in 34 years has ended.

US stocks have been in correction territory – a peak-to-trough fall of at least 10 per cent – since early February. Stocks have been edging upwards in recent months in what has been a slow grind higher. Last Tuesday, the S&P 500 finally advanced 10 per cent off those February lows, marking the end of a long (115 trading days) correction.

The recovery has been unusually slow. On average, corrections last 51 days. Of the last 20 corrections, only two lasted longer than 100 trading sessions. Now, some say the correction hasn’t really ended. Stocks remain shy of their 2018 high and some say equities aren’t out of the woods until they surpass that peak. The fact that stocks have taken so long to advance, they add, is indicative of the seriousness of the 2018 correction.

However, that argument is hard to sustain. Firstly, most years witness notable pullbacks or corrections but stocks advanced 20 per cent in 2017 without retreating as much as 3 per cent. Accordingly, 2018 is best viewed as a belated digestion, a long consolidation that gradually wrung out investor excess. Secondly, the total-return S&P 500 index (including dividends) is on the verge of recording its longest-ever period above its 200-day moving average. In other words, this has always looked like a correction in an ongoing bull market – nothing more.

Myth of the narrow market

The myth that the current rally is a dangerously narrow one just refuses to die. “What has kept the market near record terrain are a mere six stocks – Alphabet, Apple, Amazon, Netflix, Microsoft and Facebook,” complained high-profile strategist David Rosenberg last week. “Strip out these six flashy stocks, and the overall market has done practically nothing year-to-date”. Such stock market concentration has not been seen since the dotcom days, he added, when the market advance was dangerously reliant on a few large-cap tech stocks.

Such arguments are nonsense, says Bespoke Investment, which says today’s market “is nothing even close to resembling” the dotcom days. The average stock is up 3.1 per cent this year, whereas the market-cap weighted S&P 500 is up 5 per cent. In other words, the big guns are leading the way but the average stock is “not exactly slumping”.

That’s echoed by Ned Davis Research (NDR). Much has been made of the fact the five largest S&P 500 stocks are worth more than the smallest 250 stocks in the index, “implying an unusually narrow market”. However, this is perfectly normal – over the last 45 years, the top five have more often than not outweighed the bottom half. There are some breadth concerns, says NDR, “but this ain’t one of them”.

Market movements are usually explained by references to earnings, interest rates, trade wars, geopolitics and so on, but stocks ultimately fall or rise due to supply and demand. Recently, there have been more buyers than sellers, thanks to huge share buybacks.
Merrill Lynch last week noted weekly buybacks by its corporate clients were the sixth largest since 2008. Tech companies’ buybacks were the fourth largest since 2008. If the trend continues, says Reformed Broker blogger Josh Brown, “it’s not hard to understand why we’d be making new record highs soon”.