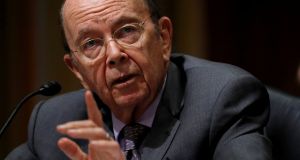 A rising equity market has long been viewed by Trump as vindication of his economic policies, so it’s hard to believe there’s “no bright line level of the stock market that’s going to change policy”, as Ross put it last week. A few days prior to the comments by Ross, treasury secretary Steve Mnuchin was interviewed by CNBC. Afterwards, he “stayed plugged in” to watch CNBC and the market reaction to his interview, tweeted CNBC reporter Kayla Tausche.

Fellow administration insiders Peter Navarro, Kevin Hassett and Larry Kudlow did the same after past appearances, noted Tausche, adding: “The administration cares very much what its words and policies do to the market.”

Last March, JP Morgan strategist Marko Kolanovic noted that a serious trade war would destabilise equity markets and that, if this happened ahead of November’s midterm elections, it would “impair the administration’s ‘market scorecard’ and likely lead to an election loss”.

Lost elections, he added, “open a path to impeachment, and other complications”.

Limited market declines won’t worry Trump, but major market falls are another matter. Despite the protestations of Ross, the US administration will be keeping a close eye on stock markets in the coming weeks and months.

Last week, Musk complained that Reuters was “relentlessly negative” about Tesla, complaining it and Business Insider had published false articles about the company.

He made no comment, however, about the market reaction to the news that Tesla had surpassed its production target of 5,000 Model 3 vehicles for the last week of the June quarter. Musk had taunted short sellers in mid-June, saying they had “three weeks before their short position explodes”. Tesla shares certainly jumped in June, soaring from below $300 to $373, but by Thursday the famously volatile stock had once again fallen below $300.

The shorts are holding tough and sceptics remain unmoved by Tesla reaching a self-imposed deadline. CFRA Research downgraded the stock, saying production rates were not “operationally or financially sustainable”, while Goldman Sachs and JP Morgan reiterated their sub-$200 price targets.

Musk needs to ease off on the outlandish promises and conspiratorial rants. He has, says valuation expert Prof Aswath Damodaran, “muddled the Tesla story and perhaps put the company at risk”.

The notion Tesla can scale up production without raising more capital is “fantasy”, said Damodaran. Musk is either “deceptive” or “delusional” and Tesla is in “clear need of checks and balances”. However, none currently exist, “and if you are bullish on Tesla, that should scare you”.

Investors could be forgiven for dwelling on the old “sell in May and go away” adage, given the recent spike in market volatility amid escalating global trade tensions, but the last few months have actually been better than gloomy headlines might suggest.

The S&P 500 actually rose in both May and June, notes LPL Research strategist Ryan Detrick. It’s good to see strength in ordinarily weak months; when stocks have gained in both May and June, the rest of the year has been higher the past 11 times, says Detrick. Since 1950, full-year returns have been lower only once out of 22 times.

Echoing this, Fat Pitch blogger Urban Carmel notes stocks have now risen in each of the last three months. Historically, gains in April, May and June have been followed by gains over the next four-, six- and 12-month periods in 14 of 15 instances, with “highly favourable” risk-reward ratios.

Many commentators are warning that stocks’ inability to hit new highs is indicative of a tired bull market that peaked in January, but the data suggests otherwise.

The recent market volatility has been pretty mild, but it’s nevertheless been enough to unnerve ordinary investors. Weekly outflows from US stock funds recently hit their third-highest level in history, and sentiment surveys suggest retail investors are especially jittery.

Unlike early 2016, there is currently no panic in global markets. However, talk of trade wars and the ongoing choppiness in markets - it’s now over five months since stocks hit all-time highs, notes Ritholtz Wealth Management’s Michael Batnick, the second-longest drought since indices first made new highs in March 2013 - mean a growing number of investors are throwing in the towel.

1 Basic income for all: Has the Covid crisis given us a new economic model?
2 Only way is up for Stripe as valuation skyrockets
3 Promontoria barred from pursuing doctor over Ulster Bank loan
4 ‘I don’t need to do any of this. . .I don’t actually need to work.’
5 Fiona Reddan: Who’s afraid of Revolut? Not AIB and BOI it seems
6 Online shoppers face unwelcome tax surprise
7 Admission of mistake in Oxford vaccine dose raises doubts over reliability
8 How long can Government afford to keep State pension age at 66?
9 AIB revives €1bn-plus problem mortgages sale
10 There was no vaccine for Anglo: Why the last crisis was different
Real news has value SUBSCRIBE
Save money on international transfers