Fretting over late-cycle stock market risk could cost you 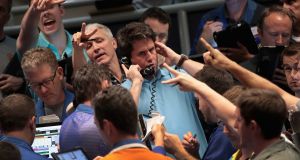 We’re in the later stages of the investment cycle and the the risks associated with owning equities are increasing, warned National Treasury Management Agency (NTMA) chief executive Conor O’Kelly earlier this month. Should investors be worried? Calling on the Government to sell its stake in bank stocks, the NTMA chief noted the US stock market was within two months of matching its longest rally, the 1990s bull run that ended with the bursting of the dotcom bubble in 2000.

“This late in the investment cycle, there is a higher degree of risk that there could be a material fall in the value of those shares than there has been in previous years,” he cautioned.

O’Kelly is not alone in his concern. A recent Merrill Lynch fund manager survey found that 74 per cent of respondents see the global economy as being in the late cycle – the most in the history of the survey. Pimco, the world’s biggest bond manager, says the global economic expansion has “room to run for another year, or maybe two”, but the risk of a recession soon after is “high and rising”.

That’s echoed by Ray Dalio of Bridgewater, the world’s biggest hedge fund; the risk of a recession in the next 18 to 24 months is rising, says Dalio, who estimates a 70 per cent chance of a US downturn before 2020.

Gluskin Sheff chief economist David Rosenberg, one of the few strategists to predict the global financial crash more than a decade ago, goes further. The S&P 500 likely peaked in January, says Rosenberg, who expects a US recession to begin in the next 12 months.

“Cycles die, and you know how they die?” Rosenberg asked recently. “Because the Fed puts a bullet in its forehead.” If the Federal Reserve raises rates and shrinks its balance sheet as much as it says it will, says Rosenberg, markets will have a witnessed a degree of tightening greater than that which preceded each of the last three US recessions.

Rosenberg’s view is a contrarian one. Few observers see a recession happening over the next 12 months, with Goldman Sachs estimating the odds to be as low as 5 per cent. Still, late-cycle angst is growing.

A flattening yield curve is often viewed as an indicator of a weakening economy, while an inverted yield – when short-term bonds yield more than long-term bonds – is seen as a harbinger of recession, typically triggered by interest rate hikes and increasingly restrictive monetary policy.

Research suggests investors are right to be wary about an inverted yield curve. There have been nine recessions over the last 60 years, according to recent research from the San Francisco Federal Reserve. Each one, it notes, was preceded by an inverted yield curve. Little wonder, then, that investors are concerned by the shrinking gap between short- and long-term rates.

Fidelity strategist Jurrien Timmer recently tweeted the yield curve “used to be obscure stock market jargon to many investors” but is now “much watched, discussed and a hashtag term on Twitter”. At recent investor events, he added, every question-and-answer session involved someone asking about the yield curve.

Scott Minerd of Guggenheim Partners, which manages $246 billion in assets, says today’s flattening yield curve “is sending a strong signal of looming recession”. Federal Reserve officials, too, are concerned. Atlanta Fed president Raphael Bostic said last month he wanted to avoid an inversion, saying it was a “surefire sign of a recession”. Fellow Fed officials Robert Kaplan and Neel Kashkari have also expressed concern, the latter saying an inversion was the “very best predictor of recession”.

However, it’s important to note that yields have not yet inverted, says BMO Capital Markets strategist Brian Belski. Yields have been flattening since 2013, he notes, during which time stocks have enjoyed strong gains. In fact, since 1980, stocks have enjoyed better gains when the yield curve was flattening compared to when it was steepening, according to Belski.

The S&P 500 “can still deliver double-digit gains during the latter parts of flattening cycles” resembling the current one, he adds. “The only time investors should worry about the yield curve implications is when [or if] it inverts,” says Belski. Even then, investors shouldn’t necessarily abandon ship.

The yield curve is a leading indicator; on average, a recession and bear market don’t occur until more than a year after the inversion. That’s echoed by Fat Pitch blogger Urban Carmel, who says the lag between inversion and the start of the next recession indicates the current expansion “will likely last through 2018 at a minimum”.

And while David Rosenberg says equity investors have nothing to show this year “except the nausea from all the roller coaster rides”. Bulls argue the market price action is not inherently troubling. Stocks soared almost 20 per cent last year and history shows a period of consolidation is perfectly normal following such periods.

The fact that markets are increasingly led by one sector – technology – may be a concern, says the Leuthold Group’s Jim Paulsen. He notes that 58 per cent of the gains of the 100 top-performing US stocks have come from technology stocks, even though the sector only accounts for a quarter of the US market. The current levels are not far off those seen at the peak of the dotcom bubble, says Paulsen, when technology accounted for 68 per cent of the market gains.

However, an actual market peak may be some way off yet, according to a recent Citigroup note suggesting markets recently entered the last part of a bull market. This period is characterised by flattening yield curves and an increasingly narrow rally led by growth and momentum stocks. This also tends to be a period where stocks enjoy nice gains, with expensive stocks getting more expensive.

Therein lies the problem for investors. “For all the time spent worrying about bear market risks, the overwhelming majority of short-term traders and professional fund managers haven’t found a way to avoid it”, says Urban Carmel. “And if they have, it has been at the expense of also missing out on the gains during bull markets”.

1 Oxford Covid vaccine trials offer hope for elderly
2 How much state pension will I get next year?
3 Ulster Bank to introduce new card payment controls on app
4 Sustainable investment: How your pension can help tackle climate change
5 Hurrah for the companies giving staff more time off
6 Covid-19 will worsen shortage of accountants, says CPA Ireland
7 RTÉ to seek 70 voluntary redundancies as ‘large costs’ beckon in 2021
8 Aryzta to pursue asset sales as takeover talks fail
9 How long can Government afford to keep State pension age at 66?
10 Apple planning updates to its AirPods earbuds next year
Real news has value SUBSCRIBE
Save money on international transfers