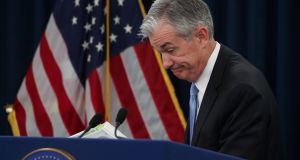 US Federal Reserve chairman Jerome Powell insisted the US economy remains strong, but many commentators speculated the Fed must be increasingly concerned about a looming slowdown Photograph: Jonathan Ernst/Reuters

Investors have been pricing in a more dovish Federal Reserve policy for months but they were nevertheless taken aback by the extent of the Fed’s U-turn last week. As recently as three months ago, the Fed was saying it expected to hike rates several times this year. Last week, it said it doesn’t expect to increase rates at all in 2019 – the first year since 2014 with no rate hike – and might only hike rates once in 2020-21.

In December, Fed chief Jerome Powell said shrinkage of its multi-trillion-dollar balance sheet was on “automatic pilot”; now, that shrinkage is scheduled to slow down as early as May and end in September. Powell insisted the US economy remains strong, but many commentators speculated the Fed must be increasingly concerned about a looming slowdown.

Others, like Allianz economist Mohamed El-Erian, posit the Fed is keeping a closer eye on the fragile international backdrop, or that it has been spooked into giving investors what they want following December’s volatility, or that it wants to “minimise criticism from the White House”.

In truth, investors would do well not to wed themselves to a particular position. The probability of at least one rate hike in 2019 has fallen from over 90 per cent to zero in just four months, notes CNBC’s Michael Santoli. “Maybe keep an open mind about what’s ahead. Things change.”

Britain’s most celebrated fund manager, Neil Woodford, has had a bruising time lately. Assets in his main equity fund have more than halved following three consecutive years of serious underperformance, but Woodford’s faith in his ability appears undimmed. In a Financial Times interview, Woodford said he would not change his investing approach.

“To do anything different from what we do now would be a fundamental betrayal, would be, frankly, a lie and we would not deserve to be in business if we did such a thing,” he said, adding he had recovered from prior periods of underperformance. That’s true – Woodford famously underperformed during the late 1990s technology bubble but was ultimately proven to be right. Still, Woodford’s investors are entitled to ask questions. Investing in unlisted start-ups and speculative biotechs will have surprised investors who associated Woodford with cheap, solid companies.

Woodford has been far too complacent about Brexit, continually insisting it would not damage the economy and railing against the “London elite’s drivel” about the subject. Woodford says he will deliver “spectacular” returns to faithful investors over the next two years, but how can he be sure? If markets are wrong now, can’t they stay wrong for another few years?

Woodford told the Financial Times he had about “two-and-a-half years” to turn things around or he would otherwise go “out of business” – a statement that will do nothing to sooth his investors’ already frayed nerves.

Kudos to Bank of America Merrill Lynch (BofAML) for that delightful headline, which neatly captures the mood of caution evident in the firm’s latest fund manager survey. Despite a strong global rally, investors remain tentative.

Investors’ allocation to cash has only fallen slightly from last month’s decade-long high. Investors are long defensive assets and short cyclical assets. The percentage of hedge fund managers who are net long equities is at its lowest level since December 2016. Importantly, the percentage of managers overweighting stocks has plunged from a net 31 per cent in November to just 3 per cent today; allocations have only been negative once in the last six years, with the latest reading way below historical norms. BofAML’s survey is best interpreted in a contrarian light. Investors should be worried when everyone’s exuberant and pounding the table for equities, but that’s far from the case right now. “There is simply no greed to sell in equities”, said BofAML’s Michael Hartnett. “The pain trade for stocks is still up”.

Contrarians will be particularly intrigued by fund managers’ ongoing scepticism towards Europe. Being short European stocks is now seen as the most crowded global cross-asset trade, according to BofAML’s survey. Europe and the United Kingdom are the only equity markets that investors are net underweight.

They are also the most disliked regions, with fewer investors intending to overweight them over the next year than any other market. Investors’ weary outlook regarding the UK is hardly surprising, given the ongoing Brexit-related shenanigans. As for Europe, one might have expected investors would have become more optimistic, given it has led the global market rally and has almost fully recovered the steep losses endured in the last three months of 2018. Instead, investors remain cautious.

Indeed, a separate BofAML report issued prior to the survey notes European stocks are trading near 50-year lows relative to global stocks while the gap between European stock and bond yields is at its widest level in 100 years. Ugly sentiment coupled with undemanding valuations suggests the European rally has further room to run.