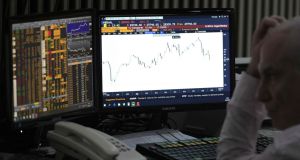 The old “sell in May and go away” adage invariably does the rounds at this time of year. So is it good advice? Photograph: Juan Mabromata/AFP/Getty Images

US indices hit all-time highs last week for the first time in seven months, but investor euphoria remains conspicuous by its absence. The title of a Barclays note last week, “New highs, but no exuberance”, says it all. With the exception of emerging markets, equity funds in all the major regions have suffered year-to-date outflows, with bonds the only asset class to see a “meaningful bid” from money managers. April was no different in this regard, with global equity funds seeing further outflows.

Consequently, the “stunning divergence” between equity performance and fund flows that started in January “continues to widen”. Fast money exposure remains relatively low; macro hedge funds and commodity trading advisers (CTAs) have closed their short bets but are not “risk on” yet, says Barclays. In short, it’s been, as Citigroup and Societe Generale dubbed it last month, a “flowless” rally.

There are some red flags. Technically, the major US indices are “extremely overbought”, Bespoke Investment cautioned last week, and the same is true of Europe. Retail investors are becoming more bullish and volatility looks extremely low – all potential signs of complacency.

Nevertheless, the overall picture suggests investors, after being burned badly in late 2018, remain guarded. Improving earnings could yet persuade the many sceptics to belatedly get on board, says Barclays, indicating stocks have room to keep rising.

Have stocks moved too far, too fast?

Falling 20 per cent over a 95-day period and then gaining 25 per cent over the next 125 days – market recoveries “don’t get much more V-shaped”, said Bespoke Investment last week. The same point was made by Bloomberg, which said the S&P 500 had “completed one of the fastest round trips in market history”.

However, a closer look at history suggests the speed of the recovery isn’t as remarkable as it seems. On average, it takes the S&P 500 19 months to recover from a bear market if the economy is in recession, notes LPL Research’s Ryan Detrick, but only about six months if the economy isn’t in recession.

Stocks were quick to recover mainly because December’s selloff was a panic-ridden one that went too far. Once it became clear recession fears were overblown and that the Federal Reserve was prepared to row back on its rate-hiking plans, stocks were always likely to rebound. That it took just four months, says Detrick, “isn’t out of the ordinary”.

Bonds and cash rarely keep up with stocks

Barclays’ latest equity gilt study is a useful reminder there’s more than a little truth to two investing cliches – be greedy when others are fearful and invest for the long run.

A decade ago, investors were panicking as the global financial crisis raged but you’d have been well rewarded for toughing it out – US stocks averaged annualised gains of 10.4 per cent after inflation, well above historical norms (6.5 per cent). The level of outperformance was less extreme in the UK, although stocks easily beat bonds while cash endured its worst decade since the stagflationary 1970s.

Buy and hold is not a sure thing – returns over the last 20 years have been mediocre in both the UK and US – but Barclays’ data confirms it works more often than not. UK stocks have beaten cash in 69 per cent of two-year periods and 76 per cent of five-year periods. Extending your horizons to 10 years is better still, with stocks beating cash 91 per cent of the time.

Should you sell in May and go away?

The old “sell in May and go away” adage invariably does the rounds at this time of year. So should you?

“Sell in May” refers to the idea that investors should move to bonds between May and October and return to stocks in November. It sounds silly, but devotees point out that since 1950, US equity gains have been confined to the November-April period. Nor is the phenomenon confined to the US, with one study finding the “sell in May” effect to be evident in 36 out of 37 countries.

There are many caveats, however. Firstly, while returns have tended to be meagre between May and October, stocks gain more often than they fall; if you sell now, don’t be surprised to buy back higher in November. Secondly, a buy-and-hold approach has historically proven more profitable if you account for dividends and trading costs (investors might also end up paying more tax if they sell and then return to stocks). Thirdly, some researchers argue that the effect disappears if certain extreme months – for example, market plunges in October 1987 and August 1998 – are excluded.

Most importantly, no one has ever offered a satisfactory explanation as to why stocks should slip between May and October. The effect may well be a fluke – hardly a good reason for selling up.

1 In six months we will be in the grip of a 1980s-style recession
2 Apple tax case: Four individual lawyers paid over €500,000 each
3 Google facing $5bn lawsuit for tracking in ‘private’ mode
4 Aer Lingus wants quarantine period axed to resume flights in July
5 Should my mam wait for house prices to drop before buying?
6 Parts of Brown Thomas and Arnotts to reopen next week
7 Deloitte expands into cloud computing with deal for DNM
8 Dublin aircraft lessor defers delivery of Boeing 737 Max until 2025
9 C&C’s business ‘materially impacted’ as it books €92.5m in exceptional items
10 Nissan warns of threat to UK factory Brexit talks fail to agree trade deal
Real news has value SUBSCRIBE
Save money on international transfers