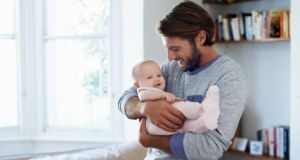 Parental leave take-up rates among fathers in Ireland have been put as low as 10-20 per cent.

Back in the 1980s, women who wanted to maintain their careers while raising their family had to contend with just 14 weeks of maternity leave – and this didn’t change until 2001.

Today, however, leave entitlement is much more generous. Mothers can get 26 weeks’ paid (statutory) maternity benefit, plus 16 weeks unpaid, and a further 18 weeks of unpaid parental leave, while fathers can avail of a similar period of parental leave plus two weeks paternity leave.

And now, mothers and fathers are set to enjoy even more leave, as the Government ramps up its proposals to extend entitlements for parents.

On Tuesday, it published its plans for a new parental scheme, which will apply to parents of babies born after November of this year. It could benefit about 60,000 parents a year.

Initially, parents will get two further weeks of leave in the first year after birth, but this will be extended to seven weeks by 2021. And like paternity and maternity pay, the Government will offer a statutory rate of €245 a week for this.

Not only that, but the Government is also set to expand the current regime of 18 weeks of unpaid parental leave by a further four weeks from September, and an additional four weeks in 2020.

Employers may be quaking in their boots at the prospect of so much leave on offer. “This is hugely costly for businesses, and it is a big challenge,” says Maeve McElwee, director of employer relations with Ibec, pointing to the “very significant rate of increase” in leave entitlements.

But the Government – influenced no doubt by requirements at EU level – appears firm in its goal.“What we’re trying to do is have a culture change,” Minister for Employment Affairs and Social Protection Regina Doherty said of the move to offer men, in particular, more leave.

But a culture change is never an easy thing to bring about.

Consider how paternity leave has panned out to date. Last year, there were about 61,000 births in Ireland yet figures from the department show that only about 24,000 men took their paternity leave.

Not everyone qualifies for the two weeks’ leave – like maternity pay, you have to have made made sufficient PRSI contributions in order to take it. But take-up of the order of less than 40 per cent is still surprising, and is far less than was originally envisaged.

Ireland isn’t alone in this trend. Research from Eurostat in 2018 found that 90 per cent of fathers across the EU do not use parental leave entitlements .

The Eurostat study found a major challenge in take-up of paternity leave, where available, was the low pay on offer, as well as cultural norms and perceptions about gender child roles. In Ireland, for example, statutory paternity leave is offered at only about 20 per cent of average earnings but in Luxembourg fathers are entitled to 100 per cent of average earnings .

OECD research suggests that fathers’ use of parental leave is highest when leave is not just paid but well-paid – about half or more of normal earnings.

Some employers in Ireland do offer generous top-ups to the statutory rate, including KPMG and Facebook, where fathers get up to four months’ fully paid leave.

But a recent study from Ibec, in which more than 400 companies were polled, found that just 46 per cent of employers were topping up paternity leave. Another survey from UCD put the figure at 37 per cent.

This means that for families who may already be down one partner’s salary, or who may just be relying on the father’s pay, taking a further hit is just not financially feasible. And the likelihood of getting a top-up may have been reduced by a recent decision in the Workplace Relations Commission.

When paternity pay was first introduced in 2016, the common view was that an employer who offered a top-up on maternity pay could find themselves on the wrong side of equality legislation if they didn’t follow suit with paternity pay.

In 2017, a male senior manager brought a case against his employer, because he wasn’t getting a top-up on his paternity leave, even though the employer offered a top-up for females taking maternity leave. The Workplace Relations Commission found the manager’s attempted equation of paternity leave with maternity leave was “misplaced”, given the special protection women have under Irish and EU law when it comes to maternity rights.

This means employers no longer fear the threat of equality legislation, and may be thus less likely to top up paternity pay.

It also means that even if employers offer a top-up on maternity or paternity pay, there will be no obligation to do so for the new parental leave scheme.

Which brings us back to an earlier point – without a top-up on the Government’s €245 a week, the majority of fathers are unlikely to avail of their leave entitlements. No matter how much leave the State offers.