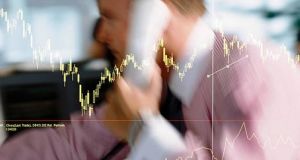 Free trading app Robinhood has already opened three million accounts this year, with more than half being first-time investors, while data from other US online brokerages confirm a similar burst of activity.

One usually sees such patterns in exuberant times, not during an economic crash, but people have time on their hands and can’t bet on sports or in casinos. As Ritholtz Wealth Management’s Ben Carlson notes, people are bored and need something to gamble on.

It’s not a good reason to dabble in stocks, of course, but don’t underestimate the power of a dopamine hit.