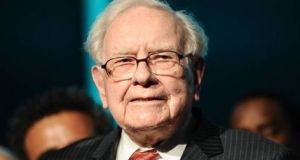 Warren Buffett: Berkshire has now underperformed the S&P 500 over the last one-, five- and 10-year periods. Photograph: Getty Images

Ackman, who turned bullish as stocks crashed in March, had recently added to his Berkshire position, reasoning Buffett would be snapping up bargains amidst the market panic. Instead Buffett sold stocks and did nothing with his $137 billion cash pile, missing out on the market rebound. One problem facing Buffett is he has too much money to invest. Ackman noted he could put his money to work faster than Buffett, saying his smaller scale allowed him to be “much more nimble”. Buffett’s defenders might say he has been wrongly written off in the past after prior periods of underperformance, but things look different today.

Firstly, Buffett is nearly 90; his long-time partner Charlie Munger is 96. Secondly, Berkshire has now underperformed the S&P 500 over the last one-, five- and 10-year periods.

Again, devotees might explain this away by saying stocks have been in a bull market for almost all that time. However, Bloomberg’s John Authers recently noted that someone investing in March 1996 would have done better by buying the S&P 500 over Berkshire. Yes, the date is cherry-picked, but we are talking about a 24-year period. Almost no one can outperform forever – not even Buffett.