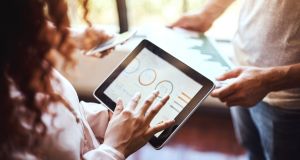 Thinking is expensive, and you often don’t get what you pay for. That, more or less, is why actively managed funds have such trouble matching the returns of index funds, which merely seek to mirror markets, not beat them.

The money devoted to research and analysis to make portfolio picks tends to produce holdings that don’t perform sufficiently better, or better at all, than the ones in the index the manager is trying to surpass.

The chaotic trading conditions of the last couple of months haven’t been much help. Since the market top on February 19th, actively managed large-company stock funds have lost 19.1 per cent to mid-April, compared to 18.7 per cent for equivalent index funds, according to Morningstar.

Fund providers, especially big ones, are trying to narrow the gap by turning to “big data” and “machine learning”, using sophisticated technological tools that are intended to take over much of the work that goes into filling portfolios.

As with other buzzwords, the meaning of these terms can depend on who’s invoking them. They typically refer to the gathering of extravagant amounts of information that may be unavailable through conventional techniques, then using autonomously functioning software to parse it, interpret it and extract patterns, inferences and insights.

Early efforts to apply these methods to asset management have had a spotty record. Fair enough; it’s still a work in progress. But authorities on the subject contend that the field has progressed enough for practitioners to begin to know what it can do well and, maybe as important, what it can’t do.

This is where human beings come into the process. Fund providers have begun to emphasise a hybrid approach in which tech collects information and does some analysis, but only to inform and advise living, breathing managers.

Asset managers are forecast to spend $1.7 billion this year on alternative data

Will it work? Big data and machine learning can help managers beat the competition, even index funds, but only if they can figure out when to rely on the tech and when to think for themselves.

“The requirement of people is critical,” said Linda Abu Mushrefova, an analyst at Morningstar who specialises in the use of technology in asset management. “It’s definitely not at a place where machines are taking over.”

But machine learning algorithms are playing a bigger role because there’s so much more and different information available. Asset managers are forecast to spend $1.7 billion this year on alternative data – facts and figures compiled by sources other than companies, government agencies and the like – compared with $232 million in 2016, according to AlternativeData.org, an association of analysts and engineers. That’s just on data, not the hardware and software that analyse it.

A report from investment management firm Neuberger Berman detailed how the company uses such non-traditional data. It included scouring credit card receipts to see if men are shopping at Lululemon, a clothing chain viewed as a destination almost exclusively for women, and collating social media posts to get a clue whether Procter & Gamble’s employees approved of a major revamping effort.

The fund provider also cited a program that evaluates natural speech for phrases that have correlations with future share price performance.

Causeway Capital Management, in a report of its own, said it used big data to help forecast the outcome of the 2019 parliamentary elections in India by hiring local people to classify 10,000 Twitter messages. That effort trained a machine-learning model that then did the same with many more tweets.

Causeway said the exercise allowed it to anticipate a better-than-expected showing for the ruling coalition. Indian stocks shot up after the election, far outperforming emerging markets generally.

Causeway has also predicted stock price movements through so-called nowcasting: generating real-time statistics of one sort or another. By buying data from a vendor that tracked the use of apps on 1.3 billion Chinese phones, for instance, Causeway said it was able to gauge how popular the companies behind each app were and how their stocks were likely to perform.

“The sheer diversity of data is much larger than before,” said Jeff Shen, co-head of systematic active equity at BlackRock, which uses big data to analyse earnings reports and analyst calls, and study online search patterns relevant to certain businesses.

“Using new data sources allows us to predict macrotrends or future cash flows of companies better” than conventional research methods, Shen said. “It allows us to ask better questions we had not thought about asking.”

They are questions that continue to be asked under the current extraordinary market conditions.

Throughout the stock market plunge, the alternative data that BlackRock uses “is providing valuable high-frequency information that is a timely reflection of what’s going on in the economy”, Shen said. “The additive nature of the data allows investors to dynamically navigate through the current market volatility.”

He declined to provide performance data, but based on a quick perusal of funds that rely heavily on big data methods, Mushrefova concluded that they have been doing no better or worse lately, compared to other funds, than during more placid times.

Shen echoed Mushrefova’s view about the role of big data in asset management. These methods, he said, are “augmenting human intelligence, not replacing it”.

“Fund management is an extraordinarily high-cognitive task,” he added. “We’re far away from turning on a computer and letting it run on its own.”

Well, maybe not that far away.

An exchange-traded fund called AI Powered Equity uses artificial intelligence to select its holdings, with little or no human intervention. But since its inception in late 2017, it has lagged the S&P 500 SPDR ETF substantially. As of mid-April, it was down 6.4 per cent, while the SPDR was up 7.2 per cent. During the first quarter, the AI fund lost 21.2 per cent; the SPDR was off 19.9 per cent .

Whatever machine learning and big data can do, it requires scale. Enormous data sets and the computing power to analyse them cost a lot

A report by the McKinsey consultancy said that some fund providers were adding one to two percentage points a year to returns by using machine learning to assess portfolio trades in advance to try to counteract behavioural bias in the investment decisions.

The cold-bloodedness of technology can come in handy, said Campbell Harvey, professor of finance at Duke University. Fund managers have behavioural biases, he said: “Machine learning has the means to flag some of these. It provides new data to discretionary managers that they only dreamed of before, and it also provides them with a sanity check and feedback on decisions they make.”

Whatever machine learning and big data can do, it requires scale. Enormous data sets and the computing power to analyse them cost a lot. So do the specialists who must be employed to clean the data, ensuring the information’s validity and reliability and removing errant bits of it, and then interpret what’s left.

Fund providers need to spread the costs over a large asset base to make it worthwhile.

Four management companies that Mushrefova highlighted for their embrace of these methods range from big to enormous: BlackRock, Goldman Sachs, Vanguard and T. Rowe Price. She finds T. Rowe Price and BlackRock especially adept in their use of tech to manage stock portfolios.

How profitable these techniques are in general is hard to know. Managers tend to highlight the endeavours that work, not the failures.

The costs and complexities are large enough that active managers collectively are unlikely to close the performance gap with index funds, at least for a while, Harvey said. But he envisions a consolidation in which smaller managers that can’t afford to buy large data sets or hire people to handle them fall by the wayside, leaving the industry dominated by a small number of larger managers.

Shen isn’t ready to count out smaller managers yet. He isn’t convinced that using big data will ensure success for larger ones, either.

“It’s really becoming more of a necessary condition to use some of these algorithms, not a sufficient one,” he said. “We can become much better, but we can also become much worse. The world is becoming more complex in front of us.”