Salary lift from doing an MBA may disappoint 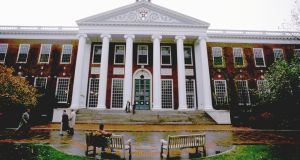 Thinking of doing an MBA but worried that you will never earn back the cost of the degree? Well, new figures from the Financial Times show that graduates of Smurfit School at UCD (the only Irish school on the Top 100 global list), saw a 71 per cent uplift in their salaries upon completion of the course. This means for example, that a graduate earning €60,000 before starting the course, earned, on average, €102,600 having completed it. However, while it’s a salary increase most people would envy, the return lags considerably behind salary increases reported at other business schools. It is in fact the fifth-lowest in the survey, with University in Sydney, New South Wales Business School in Australia posting the lowest salary increase, of 61 per cent.

The greatest increase in post-MBA salary was recorded at Ipade Business School in Mexico, where applicants enjoyed an average salary increase of 180 per cent after graduation. Graduates of US universities, such as Rutgers in New Jersey, Michigan State University and University of Iowa, all reported salary increases of more than 120 per cent. The top ranking business school in the survey, Insead in France, has a 95 per cent salary increase, while Harvard in Boston, Massachusetts, boasts a 97 per cent increase and Cambridge a 107 per cent uplift.

The impact on your potential salary is an important consideration when deciding to pursue an MBA. After all, if your employer isn’t footing the bill, embarking on an MBA can be an expensive endeavour. Fees at UCD Smurfit School, for example, are € 34,500 for 2017/2018 and €32,000 for a full-time programme at Trinity College Dublin. It’s a hefty chunk but still substantially less than what an MBA student can expect to pay at Harvard ($63,675/€60,000) a year, programme lasts two years) or Oxford University Said (£52,000/€61,000).

This means that when it comes to “value for money”, UCD Smurfit School is closer to the top of the class, placing in 16th. The metric is calculated using the salary earned by the alumni today, course length, fees and other costs, including the opportunity costs of not working for the duration of the course.

The top ranking “value for money” MBA is found at University of Cambridge, Judge, followed by the European School of Management and Technology in Berlin, and Edhec Business School in France.

The survey also points to buoyancy in salaries, with UCD MBA graduates earning $113,904 upon graduation, up by about $6,000 on 2016. Overall, business school alumni across the globe were paid an average of $142,000 in 2016, the survey shows. The previous year’s graduates earned an average of $135,000 after the same period. According to the Financial Times, the last increase of such a size occurred in 2006; salaries flattened after the financial crisis, sticking at about $127,000 between 2008 and 2013.

1 ‘Saudi Arabia is where the opportunities will happen in future’
2 MSD buys Takeda biologics plant in Dunboyne
3 Ten of the most mysterious aircraft disappearances
4 Facebook agrees Irish wind-farm deal with Brookfield in Tipperary
5 Trump signs executive orders banning TikTok and WeChat
6 Two men face fraud charges over £1.2bn sale of Nama’s NI loans
7 Wifi problems? Quick tips to get your home internet out of the slow lane
8 Refurbished Cafe en Seine doubled sales to €9.5m before pandemic
9 Accidental engineer morphs into a top executive at Microsoft
10 Creative thinking from inside the box
Real news has value SUBSCRIBE
Save money on international transfers