Renters say ‘we’ll never be able to afford a home’ 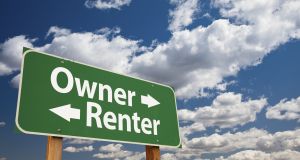 Rising rents are causing ever more problems for those locked out of the housing market.

As rents to continue to reach new highs across the country, about seven out of every 10 renters in Ireland now say that they’ll probably never be able to afford to buy a house, while almost 90 per cent worry, to varying degrees, about being able to afford their monthly rental payments.

Latest figures from the Residential Tenancies Board shows that national rents reached a high of €1,169 in the first quarter of the year, while Dublin rents hit €1,662 a month.

Mark Corcoran of Taxback.com, said the survey clearly illustrated the “new reality for a whole generation of Irish people”.

“While attitudes and perceptions towards long-term rental in Ireland are changing, for many Irish people the absolute ambition at a certain stage in life is still to buy a house and own your own property. What this survey reveals is that for a large percentage of people, that ambition feels very much out of reach,” he said, adding that renters are caught in the “vicious cycle of high rents”, making it nigh on impossible to save for a deposit and therefore making a move from the costly rental market unattainable.

The survey, which was based on the views of almost 2,000 renters nationwide, reveals that only 12 per cent didn’t worry at all about meeting their rent. On the other hand, about 64 per cent of respondents said that they “always” worried about their ability to pay their rent, with a further 24 per cent “‘sometimes” worrying.

Meanwhile, a separate survey from Taxback.com found broad support for the introduction of the “co-living” concept in Ireland. While there has been an element of a backlash against co-living, whereby residents rent their own bedroom and share communal spaces such as kitchens and living rooms, about 61 per cent of respondents to the survey said they would accept the model. This was primarily based on its potential to alleviate the shortage of accommodation.

When it came to so-called “cuckoo funds” however, or international institutional funds which are buying up large tranches of properties that could otherwise have been acquired by first-time buyers, the response was less favourable. Indeed the vast majority (71%) said that more Government intervention and control over these type of investment activities is warranted, while just 16 per cent said that we need the additional capital that these funds inject into the Irish property market to house our growing population.

1 ‘In Austin, there just seems to be something for everyone here’
2 Euro finance ministers agree €500bn package to address pandemic fallout
3 Lockdown exit: How can Irish economy reopen without big health risks?
4 Dutch go out on limb in fractious negotiations on aid for fellow EU states
5 Timeless tips and fresh perspectives for uncertain times
6 Eurobonds set aside as finance ministers broker compromise
7 TCD to spend €200,000 on Chinese student recruitment drive
8 Debenhams to shut all stores in Republic with loss of 2,000 jobs
9 Bank puts business owner on hold for month on Covid finance
10 Amazon fly dedicated aircraft into Belfast to fill online orders
Real news has value SUBSCRIBE
Save money on international transfers