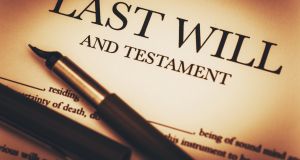 I am told by the HSE that I need to appoint a legal representative but really don’t know where I stand in terms of the case.

My stepmam – the woman who brought my older brother and myself up since we were toddlers after my Dad and my birth mam split up and my Dad got custody of us – passed away in June of this year without making a will. My father passed away in 1988.

I have been contacted by the HSE to request that I get legal representation for myself, my brother (we are in our 50s) and my mam’s surviving two brothers and one sister.

This suggests to me that, as stepchildren, we may not be entitled to inherit any monies that my mam has left and it will be shared between my mam’s brothers and sister. Is that actually correct?

I just wanted some advice before embarking on the employment of a solicitor which may leave me with a large solicitors bill, especially if I have no legal standing in terms of inheritance.

I am not sure what the role of the HSE is in dispensing legal advice in situations like this but, as they have, I can easily understand why they have given you that advice. The position of stepchildren in Irish law is , at times, contradictory – and that certainly seems to be the case in your situation.

It’s not bad advice at all. Notwithstanding my occasional harangues against the legal profession, dealing with your rights as stepchildren to the estate of a woman who has died without making a will, while straightforward, is something that can be hard to understand.

There is no obligation to appoint a solicitor. If you are comfortable with legal matters and/or an organised person who can manage paperwork and deal with official forms, it is a job you might feel comfortable taking on yourself. But the law is an area that is so unfamiliar to so many people – and one that generally scares people.

And, given the emotions in a complex family structure like you have, personally, I think it would be sensible to talk to a lawyer.

The big problem, as I see it, in your situation is that stepchildren appear to be regarded differently in the two relevant pieces of legislation – the Succession Act, which dates back to 1965, and the 2003 Capital Acquisitions Tax Consolidation Act.

We have written before about the rights of stepchildren under the 2003 Act. It is quite straightforward. Section 2 of the Act sets out the meaning of various terms used in the legislation, which is the piece of legislation governing the allocation and taxing of benefits under a will.

In this section 2, the definition of child states explicitly that it includes:

(b) a child adopted either under the Adoption Acts 1952 to 1998, or under a foreign adoption which by virtue of section 2 , 3 , 4 or 5 of the Adoption Act 1991 , is deemed to have been effected by a valid adoption order within the meaning of section 1 of that Act.

It is the only time the word stepchild is mentioned in the 133 pages of the Act.

So, as far as taxing any inheritance you receive, you as a stepchild have precisely the same status as a naturally born child – or an adopted one. Primarily that means that, if you inherit from your stepmother, you are entitled to receive the same as any other child before considering the tax implications.

However, the tax position is only relevant if you inherit, generally under a will, in the first place and this is where the two pieces of law seem to be at odds.

Among other things, the Succession Act lays down who gets what in a position where someone dies without making a will – a situation that is official called intestacy.

And the problem here, for you, is that it includes no similar definition copperfastening the position of stepchildren. In fact, it does not mention stepchildren at all. Instead, it refers to the “issue” – a rather soulless term but one that is definitely not good news for you.

If someone dies without making a will, the Succession Act sets out who has prior claim on the estate. Essentially, if the deceased person has a spouse or civil partner but no children, that spouse gets the whole estate. As your father is dead, this does not apply.

The key thing here is the definition of “issue”. Apparently – and this was news to me, the term does include some children but not others. Children born in or outside marriage or legal partnership are included, as are adopted children – and the descendants on any of these types of children.

However, crucially, it does not include stepchildren and, perhaps less surprisingly, foster children.

This seems alarmingly odd and presumably is due partially to the fact that we are discussing 1965 legislation here. It does appear peculiarly outdated, especially in a modern society where stepchildren are far more a feature of family structure.

However, it appears the Oireachtas has yet to get around to updating the law – or at least, that’s my best guess.

The cold truth, unfortunately, means that without a will, you have no rights to inherit from your stepmother.

In that event, the order of succession moves on and next in line are your stepmother’s parents, if they were alive. Presuming not, her brothers and sister are next in line.

As it stands then, they will inherit all of your stepmother’s estate – regardless of her wishes. And this is why making a will is so crucially important. If you had been mentioned in the will, you would have inherited and benefits from the more favourable tax treatment granted to all children, including stepchildren.

What remains unclear, and this is one of the reasons you should appoint a solicitor to protect your interests, is what, if any, provision your father made for you in any will he may have left when he died.

You don’t say but I assume he had one. Otherwise, if her’s was intestate, you would have been entitled to a third of his estate between you. It could be that he made provision for you down the line in his will.

That aside, unless you can come to some agreement with your stepmother’s brothers and sister – which would, in itself, have less favourable tax treatment – it would appear to me that you are left high and dry. Whether this matters financially to you in your 50s, only you can tell.

I’m no solicitor but, in this case, I think engaging one would be money well spent. Just make sure they know their way around inheritance.