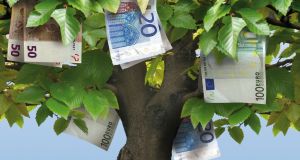 The sale of the 10,000-acre portfolio by Irish Forestry Funds last May has raised the ire of some of the investors in the forestry funds. Photograph: iStock

A group of angered investors in Irish Forestry Funds are coming together to challenge the decision of the directors of the funds to sell their shareholdings for substantially less than what had been projected.

Dubbed at the time as the “single largest private forestry transaction in Irish history”, the sale of the 10,000-acre portfolio by Irish Forestry Funds last May has raised the ire of some of the investors in the forestry funds, who invested sums starting at £500 (€630) as long ago as 1997.

Now one of the investors, Lar Sheeran, is looking to take a group action against the directors of the forestry funds.

“This is definitely going to take wings,” he says.

Already he has 25 investors on board, and the group has appointed a qualified financial adviser (QFA) to prepare a report for the group, and are seeking to appoint legal representation to pursue legal action, and potentially a complaint to the Office of the Director of Corporate Enforcement.

Key to the group’s concerns are the level of returns received. Established in 1997, the 30 funds attracted some 12,400 investors, who were hoping to stay locked in for up to 30 years to benefit from a tax free return on their money.

With projected annualised returns of up to 14.6 per cent compounded annually, investors put in a minimum of about £500 (€630) in the late 1990s/early 2000s. This would have made the investment worth some €37,000 – tax free – if all had gone to plan, and the fund had lasted the full term and met expected projections.

However, earlier this year, the assets in the funds, of some 10,000-acres of mature Irish forests, were sold to AXA Investment Managers on behalf of its private clients. Last Wednesday, investors started receiving their cheques, but for much smaller amounts than the original projections had envisaged, with returns of about 2-3 per cent a year, or 40-107 per cent over the term of the fund, depending on when, and on which fund, investors put their money.

Explaining the performance of the funds, Trevor McHugh, a director of the Irish Forestry Funds and managing director, commercial, with Veon, said that the original projections were made “in a different economy”, and that market conditions have deteriorated severely for Irish forestry in recent times. He also noted that in the terms and conditions of the original investment document, potential investors were advised of the potential risks, and that these could negatively impact their investments.

“The motivation for the sale is a strong price that was received at the beginning of the year,” he said, noting that this, combined with changing market conditions – including Brexit, an uncertain economic outlook, falling timber prices plus a spruce bark beetle infestation – convinced the directors that it was a good time to sell.

As such, he said that the directors “acted in the best interests of the investors taking account of the emerging risk profile of the Irish timber market.”

“We had a strong offer on the table that locks in profit,” he said, adding that “all of the shareholders made a profit”.

In addition, investors have also expressed concern that a company associated with the directors’ of Irish Forestry Funds, Veon, will continue to provide forestry management services on the portfolio to the new owners, AXA.

In response, Mr McHugh said that while Veon has been retained, it will be in a reduced role, which means that the fees it will earn have also been reduced “commensurate to the role”.

1 Basic income for all: Has the Covid crisis given us a new economic model?
2 Chris Johns: Economies may enjoy ‘roaring twenties’ if ministers learn lessons
3 Wet pub openings fuelled rise in Irish Covid infection rates – report
4 Only way is up for Stripe as valuation skyrockets
5 How long can Government afford to keep State pension age at 66?
6 Direct sea routes to Europe offer certainty in choppy Brexit waters
7 Ten of the most mysterious aircraft disappearances
8 Why we should ban autonomous cars now
9 ‘Make plans but don’t hold on to them too seriously’
10 So you want to invest in the stock market: what will it cost?
Real news has value SUBSCRIBE
Save money on international transfers