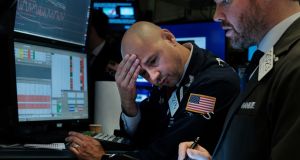 Stocks tanked following last week’s inversion of the US treasury yield curve, a key recession indicator. Should investors be worried?

You can argue there was too much hype around the inversion, when 10-year bond yields fell below below two-year yields for the first time since 2007. In a low-rate world, an inversion “may be a less good” recession signal than in the past, former Federal Reserve chair Janet Yellen said last week.

Secondly, the economy can keep expanding and stocks can keep rising for months, sometimes years, after inversions.

Thirdly, was this really news? Three-month US yields have exceeded 10-year yields for months now; historically, that’s been a more reliable recession indicator than the spread between two- and 10-year bonds.

Still, general bond market movements indicate cause for concern. The sudden drop in 30-year US bonds was noted by Bianco Research, which found only seven similar instances over the last 35 years, all of which occurred during market crises.

Recession odds have risen and are uncomfortably high, admitted Janet Yellen. As for timing, Bank of America notes the S&P 500 peaked within three months in six of the last 10 yield curve inversions. Stocks can take time to peak, it adds, but history indicates indices are “on borrowed time after the yield curve inverts”.

The buy-the-dip trade has been a winner throughout the 10-year US bull market but this time may be different, according to UBS.

Looking back over nine economic cycles since 1974, it found buying dips works great during the “risk-on” phase, when the economy is getting stronger and leading economic indicators such as PMIs (purchasing managers indexes that measure business activity) are accelerating.

Performance is mixed after readings peak (the risk-off phase) while buying into weakness is usually a bad idea when PMI readings fall below 50 (the risk-aversion phase). That’s a concern – with PMIs in the low 50s and likely going lower, UBS reckons markets are now in risk-aversion mode.

UBS says the ideal buy-the-dip scenario occurs when a strengthening economy is accompanied by favourable earnings and interest rates supportive of higher valuations.

Regarding the latter, it cautions the lagged effect of higher yields 18 months ago suggests financial tightening in the coming months. The earnings outlook, meanwhile, has darkened considerably since December 2018, when dip-buyers were rewarded for buying falling stocks. It all suggests that buying the dip may finally be a “losing proposition”.

A fortnight ago, the amount of government debt trading at negative yields exceeded $15 trillion. Last week, it crossed $16 trillion. Negative interest rates, once unthinkable, are becoming increasingly normal. Is this a bond market bubble?

Yes, according to a recent Longview Economics note based on the work of economist and bubble expert Charles Kindleberger. Bubbles are defined by four features, said Kindleberger.

One, they are underpinned by cheap money. Two, investors use leverage to participate in the run-up. Three, valuations are notably expensive. Four, investors embrace a “this time it’s different” narrative that explains away valuation concerns.

The first two criteria are satisfied. Regarding the third, “it’s clear to any rational observer that the valuation of bonds is absurd”, says Longview, which notes how some mortgage holders are now being paid to borrow money to buy their house.

As for the supportive narrative, Longview points to bond bulls citing regulatory demands for fund managers to buy bonds as well as the increasingly popular notion that there’s nothing inherently unnatural about negative interest rates.

So yes, bonds are in a bubble. Will it burst?

Longview expects bonds to give up much of their gains in coming months. Nevertheless, Kindleberger argued the removal of cheap money is what always bursts the bubble. With central banks in easing mode, that’s not happening any time soon, suggesting the bond bubble “has theoretical room to continue inflating”.

Fund manager fear not yet at extreme levels

A record number have taken out protection against sharp near-term stock market falls, while expectations for bond yields have been lower on only three times in the past 15 years. In Europe, equity allocations are 1.7 standard deviations below average.

Still, contrarians shouldn’t get too excited. Cash levels, which usually spike during market scares, fell slightly over the last month. Nor was there any change in BofAML’s Bull & Bear indicator, which is not yet at a bearish extreme.

The most notable finding, however, was the US is the region investors most want to overweight over the next 12 months, even though a huge 78 per cent say US stocks are overvalued – a peculiar combination that is the second-most extreme on record.