Pensions: Estonia plans to unleash a potential €4.85bn on economy 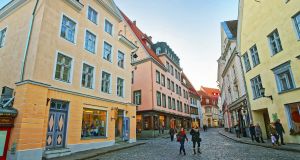 The Estonian government is meeting an election pledge by a junior coalition member to let more than half the Baltic nation’s 1.3 million residents reinvest or spend mandatory pension savings. Photograph: iStock

Cracking open a €4.85 billion piggy bank of pension savings may be a vote-winner. But Estonia’s plan to allow early access to retirement cash is facing a tide of criticism for being short-sighted.

The government is meeting an election pledge by a junior coalition member to let more than half the Baltic nation’s 1.3 million residents reinvest or spend mandatory pension savings taken from tax contributions and gross salaries since 2002.

The money would be released from September 2021 under draft legislation to be passed on Wednesday, though president Kersti Kaljulaid objects and may seek a ruling from the Supreme Court, according to local media.

Polls show more than two-thirds of Estonians support the changes to the so-called second pension pillar, which the finance ministry reckons could drain as much as 30 per cent of cash from the system.

While juicing consumption in the short term, the move could leave retirees short later on, according to the central bank. It risks pushing pensions as a share of pre-retirement earnings below the current level of 41 per cent – already one of the European Union’s lowest.

Tinkering with retirement benefits isn’t uncommon in eastern Europe: Hungary and Poland have performed similar manoeuvres and helped their fiscal positions in the process.

Estonia’s government says people deserve a choice after the pension funds that mainly manage mandatory savings lost an inflation-adjusted 1.3 per cent between 2007 and 2017 – the worst performance among the 37-member Organisation for Economic Cooperation and Development.

“We can see returns are far from what was promised in the beginning,” prime minister Juri Ratas said in September.

Industry lobbyists say problems have now been largely addressed by removing investment barriers and slashing funds’ fees. But opposition parties complain the government is just trying to boost its popularity at the expense of long-term sustainability.

Ex-central bank governor Ardo Hansson called the plans “vandalism”. The bank itself forecasts a potential recession of as much as 2 per cent after the initial spending splurge leads to an output figure that can’t be matched the following year.

The International Monetary Fund is worried, saying in November that “the culture of savings is still developing, which makes the complementary role played by pillar II savings critical”.

The OECD also advised against any early withdrawal of funds before retirement.