Buy a property with your pension? Government says no

EU directive brings extra requirements. Why is there such opposition to it? 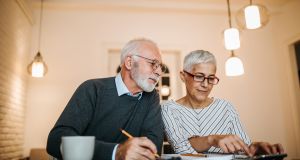 ‘Zero consideration has been given to the issue of adequacy or coverage; it doesn’t benefit citizens in any real meaningful way,’ says one pensions professional. Photograph: iStock

As if pensions weren’t already complicated enough, a move at Government level to impose new EU regulations on members of all occupational schemes is set to heighten complexity.

The impending introduction of an EU directive, Iorps II, will introduce enhanced governance requirements for members of occupational pension schemes, but it will also have a significant impact on members of smaller self-administered schemes, many of whom will be forced out of their current pension structure.

Pension experts say the move is neither warranted nor needed.

What is the new regulation?

“Transposition will raise governance standards, improve trustee qualification and suitability and increase supervision through enhanced powers for the Pensions Authority, ” says a spokesman in the Department of Employment Affairs and Social Protection, the department with responsibility for transposing the directive.

While the directive came into force on January 13th, 2019, Ireland has yet to transpose it into Irish law, joining others such as Luxembourg, France and Germany, and thus finds itself in breach of EU requirements. According to figures, from March 12th just 39 per cent of European countries had transposed the law into national legislation.

However, the Department of Employment Affairs expects that the legislation implementing the directive will be introduced “as early as possible in 2019”.

If the directive is aimed at improving consumer protection, then one might wonder why there has been such opposition to it.

Well, this is because a subsection of Irish pensions had previously been exempt from its rules.

Iorps II, like its predecessor, is primarily aimed at occupational pension schemes of 100 members or more, which means countries are allowed to look for a derogation from the rules for smaller schemes.

This is what happened in Ireland in 2004 when then minister Seamus Brennan granted a special derogation for Irish one-member schemes, including self-administered pensions, from Iorps I.

This time around, however, the Government has taken a different approach, and wants the regulations to cover all occupational schemes, including small self-administered schemes (SSAS).

According to Regina Doherty, Minister for Employment Affairs, this is so that “members of small schemes, including small self-administered pension schemes, get the same protections and oversight as members of large schemes, to safeguard their investments for the purposes of providing adequate income in retirement years”.

However, some see the move more as a means of cutting the number of schemes in existence, given that Ireland has far more pension schemes than other countries.

Who will it affect?

The new rules will affect single-member schemes, of which there are an estimated 100,000, in two ways; firstly, by significantly ramping up the governance requirements; and secondly, by restricting how such schemes can invest.

“It means that a one- man SSAS post Iorp II is going to have to adhere to the same regulatory burden as a larger scheme like the An Post staff scheme,” says Jim Connolly, head of pension and technical services with Goodbody Stockbrokers.

Indeed the move means that the 100,000 or so single-member schemes in Ireland will now have to follow regulations that will require them to have four trustee meetings a year, audited sets of accounts and statements of policy on conflicts of interest, among other things.

Once the new regulations are in place, it’s going to become a lot more difficult for these self-directed schemes to invest as they have done in the past

It is this heightened regulatory burden that may force some scheme members to shut down their plans and transfer into other alternatives, such as buy-out bonds or PRSAs.

“It’s not investment choices that’s going to kill off SSASs – it’s governance and regulation,” says Connolly, noting that the additional trustee, custodial and actuarial requirements are going to cost. And they won’t be cheap.

He has done the figures and says he expects fees to jump by the order of about 240 per cent for SSASs. The Association of Pension Trustees in Ireland have benchmarked the average SSAS at €436,000, with pensioneer trustee fees of about €2,180 a year; but with the arrival of Iorps II, fees could jump to about €5,232 a year.

For many such pension savers, the jump in fees may mean it’s no longer economical to have such a fund, and means that many will look to migrate out of the SSAS so they don’t get caught by these regulatory protocols.

“What we’re predicting is a mass migration of assets out of all occupational structures,” says Connolly, adding that it’s not just SSAS, it’s about all one-person schemes (executive pensions from insurers) and small group schemes.

The other issue that smaller schemes will face is how Iorps II will restrict how they can be invested. Of the 100,000 or so single-member schemes, the majority of these will already comply with the new investment rules.

But the 7,000 or so SSASs will be hit on this front. These schemes have 12 members or fewer, or are designed primarily for 20 per cent directors. They are typically owned by owners or employees of SMEs, and often invest in Irish property, SMEs, renewable energy and social housing.

Once the new regulations are in place, it’s going to become a lot more difficult for these self-directed schemes to invest as they have done in the past.

According to the Department of Employment Affairs, “after transposition all single-member schemes, including Small Self-Administered Schemes, who are the only schemes currently allowed to borrow, will not be allowed to enter into new borrowing arrangements, except for short-term and liquidity purposes. All of their future investments will have to be made in accordance with the investment rules in the directive.”

This is because Iorps II is introducing new investment rules, which will preclude occupational pension funds from borrowing (except in very limited circumstances); will introduce a restriction on property investments; will require a minimum of 50 per cent of the pension fund to be invested in “regulated markets”; and require environmental, social and governance issues to be factored into investment decisions.

In practice, this will limit the investment opportunities available to such funds.

Property, for example, has proven to be a popular investment in recent years, given the growth in rents. The advantage of buying through a pension fund, rather than outside of one, is that rent is allowed grow tax-free within the pension fund, which means no annual tax liability and no tax returns. And if you sell it, any gains are distributed free of capital gains tax back into the fund.

The new rules will also ban such funds from borrowing, despite the fact that Revenue rules already determine that lending to a pension fund should be “moderate”, while such pension funds will also find it difficult to invest in so-called unregulated sectors like renewable energy.

For Joe O’Regan, director with Blackthorn Capital, the Government’s approach is “a bit heavy-handed”, and he argues that the term “unregulated” somehow implies that there is good and bad between regulated and not regulated.

His fear is that a potential unintended consequence of the new regulation is that it could see pension fund savers simply cut their contributions.

This is because the funding opportunities via an SSAS are better than under a PRSA, where contributions are bound by rules around age and percentage of salary that can benefit from tax relief.

“It will deter that cohort,” he says. “You have a lot more freedom [with an SSAS] and the reality is a lot of those people fund in because of that freedom. People who are self-employed don’t necessarily have an appetite to being part of a large collective,” he says, arguing that the new rules could act as a “huge disincentive” to funding a pension.

“While it is understandable that in larger schemes investment risk may need to be curtailed to reflect the range of consumer interests, appetites and financial status of members, in the case of self-directed pension funds, individuals should be free to determine, within reason, which funds they wish to invest in,” says Kelly.

For Connolly, the “disappointing” thing about not giving a derogation to such pension schemes is that “zero consideration has been given to the issue of adequacy or coverage; it doesn’t benefit citizens in any real meaningful way”.

What are the options then?

As the legislation is prospective, as opposed to retrospective, investments already made in property, SMEs and so on won’t be impacted on the regulatory front. However, as pointed out above, increased costs may make such schemes unviable in any case.

As such, many scheme owners may look to transfer their pensions to a structure such as a PRSA or a buy-out bond.

For those who do, they’ll still be able to invest how they so wish via a buy-out bond or PRSA – and borrow through these vehicles – or, once retired, via an ARF.