How worried should investors be by climate change? 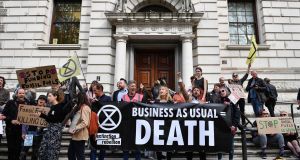 Earlier this month, Bank of England governor Mark Carney and his French counterpart, Villeroy de Galhau, warned that limiting global temperature increases this century to below two degrees, as required by the 2015 Paris climate agreement, will require a “massive reallocation of capital”.

The global financial sector has a “crucial” role to play, they said, adding: “If some companies and industries fail to adjust to this new world, they will fail to exist”. This is not the first such warning from Carney, who cautioned in 2015 that necessary climate change action could leave investors in the fossil fuel and insurance industries with “potentially huge” losses as a result of stranded assets that could become “literally unburnable”.

The first scenario, which would see emissions peak by 2020 and which would require strong action by governments across the world, would see global demand for oil drop by a third by 2050; an aggressive phasing out of coal power; substantial power generation increases, with the bulk of this coming from renewables; and a major move towards greener driving, with electric cars making up half of all vehicles sold and a quarter powered by liquid petroleum gas (LPG).

The implications are devastating for investors in coal stocks, which are predicted to go the way of the dodo; the sector will have lost 59 per cent of its value by 2030 and coal investors will be completely wiped out by 2041, according to Mercer’s projections.

The oil and gas sectors, which contains global giants like Exxon Mobil and Shell, will do a little better, although not much – the global drive towards renewable energy will result in the industries losing 42 per cent of their value by 2030 and 95 per cent by 2050.

Other industries will benefit, however, with the biggest gains accruing to renewable energy stocks and “minor positives” for the materials and telecom sectors.

As a result, the overall impact on the global economy is broadly neutral. Strong action would put a slight dent on global stock market returns, curtailing returns by 0.2 per cent a year over the next three decades.

However, after examining the implications for other assets such as bonds, property and infrastructure, Mercer projects that aggressive climate change action will actually benefit investors by between 0.1 per cent and 0.3 per cent a year.

Returning to the question of stock market returns, Mercer’s model indicates efforts to limit climate change will give a slight boost to emerging markets over developed markets, although the main finding is simply that investors must heed sector-specific warnings regarding high-polluting companies and tilt towards renewable energy and sustainable assets.

“Investing for a 2°C scenario”, the report concludes, “is both an imperative and an opportunity”.

What if governments are less stringent in their efforts, resulting in temperature increases of three to four degrees?

Unsurprisingly, the big polluters are much better off; instead of falling 95 per cent, oil and gas stock returns may be lower by only around 15 per cent by 2050.

Nevertheless, all sectors with the exception of renewables will be negatively impacted in each of the three timeframes. Property investors, too, should be concerned; while the 2°C scenario has a neutral effect on property value by 2030, a 4°C scenario will have negative near-term and long-term impacts.

If policymakers, companies and investors delay, says Mercer, then two things can happen: either temperature increases exceed recommended levels, hurting investors everywhere, or it will eventually necessitate a more rapid transition to a low-carbon economy.

“Sudden changes are more likely to be disruptive than an ‘orderly’ transition”, says Mercer.

Legal & General, the UK’s largest money manager with assets under management of £1 trillion (€1.15 trillion), agrees climate change brings both risk and opportunity. Aggressive action would see winners and losers largely cancel each other out.

Billionaire investor and contrarian Jeremy Grantham, the founder of fund giant GMO, goes further. Earlier this month, Grantham warned that leading oil and gas companies would be devastated by the eventual introduction of a carbon tax.

Such a tax is, he says, a “certainty”, as the alternative is that “we’ll be on our way to a failed civilisation”. Long preoccupied by environmental concerns, Grantham believes financial markets are seriously underestimating the threat posed to fossil fuel companies, who are conspicuous by their absence from GMO’s Climate Change Fund.

Some argue fossil fuel companies aren’t doing enough to inform their investors. Last October, for instance, the New York State attorney general filed a securities-fraud lawsuit against Exxon Mobil, saying the company – the most valuable firm in the world less than a decade ago and still valued at some $350bn today – “misled investors regarding the risk that climate change regulations posed to its business”, with the firm allegedly using different costs figures internally than the ones publicly disclosed.

Extreme weather events in the US and Europe over the last year have highlighted the danger posed by climate risks, but investors have tended to shrug their shoulders.

BlackRock found investors were quick to sell out of affected utility stocks in the immediate aftermath of extreme weather events, only for the stocks to quickly recover their losses. This suggest investors have focused on headline risk, as opposed to assessing companies’ long-term vulnerability to climate-related weather events, the end result being they are discounting risks “already lurking” in their portfolios.

Markets are not completely blind to the risks, however; the most climate-resistant utility stocks are trading at a slight premium and BlackRock expects this valuation gap to widen as risks become increasingly obvious over time.

When will markets begin to reprice climate action risk?

No one can say for sure, but both BlackRock and Mercer agree a shift in prices could come quickly.

“Investors who are not thinking about climate-related risks, or who view them as issues far off in the future”, says BlackRock, “may need to recalibrate their expectations”.