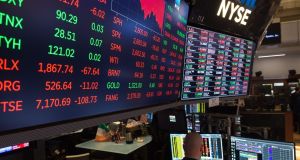 Amid the ongoing agonising about US inflation and the interest rate outlook, stocks are enjoying a very fine earnings season. Photograph: Getty Images

The herd instinct is alive and well, judging by the latest Merrill Lynch monthly fund manager survey. In recent months, the percentage of fund managers viewing stocks as overvalued hit record levels. Nevertheless, everyone continued buying anyway; in January, equity allocations hit two-year highs; cash levels touched five-year lows; the number of investors buying downside protection against a correction hit levels last seen in 2013. Of course, stocks then plunged, prompting a sharp about-turn in the latest survey. The percentage of investors buying protection against a “sharp” market fall soared, recording its biggest one-month jump on record. Equity allocations suffered their biggest monthly fall in two years. In other words, if others are buying, you must do the same, even if stocks are overvalued. And if others are selling and stocks are plummeting – well, that’s just the time to buy downside insurance. Herding behaviour aside, the sentiment change was not sufficient to take Merrill’s Bull & Bear Indicator out of “sell” territory. That suggests that in spite of last week’s strong market rebound, stocks are likely to retest recent lows.

Montier: stocks are in a

Investor herding is annoying GMO’s James Montier, who sees the Merrill survey as further evidence that stocks are in a “cynical bubble”. Montier’s latest note describes stocks as “obscenely overvalued”, while admitting he has a track record of being too early in calling bubbles. He points to how he turned bearish on Thailand in 1995, two years before the Asian financial crisis; he predicted the technology bubble would burst in 1997, three years before the top; and he was a few years early when warning about the US housing bubble in 2005. The implication is that Montier has a history of being early but correct, which is somewhat disingenuous – he has been bearish on this bull market since at least 2011. Still, there is some validity to his latest complaint about “that strangest of creatures: the fully invested bear”. Managers have overweighted equities despite seeing them as plainly overvalued – “a cynical bubble built not on faith in a new era, but on overoptimism about the ability to get out before everyone else”. Of course, it’s impossible for everyone to get out on time. The speed of the latest correction is proof that “crowded exits don’t end well – inevitably some are crushed in the stampede”.

The figures are additionally impressive in that expectations had been high, with analysts busy hiking forecasts in the run-up to earnings season. Last October, earnings were forecast to rise 11 per cent in 2018; that figure has surged higher to almost 19 per cent today. Of course, much of this is due to US tax cuts, which many view as a token one-off boost. Still, the S&P 500 now trades on 16.5 times estimated earnings, down from 18.5 in January. Clearly, the recent market falls, coupled with surging earnings, mean stocks look noticeably less pricey than they did a few weeks ago.