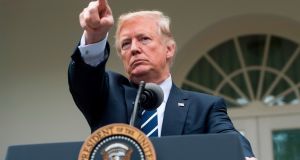 Last week marked the 30th anniversary of Black Monday, when stocks suffered their biggest one-day plunge in history. There were the usual warnings regarding another 1987-style calamity. Barrons’ front-page was headlined “Echoes of the 1987 crash”, followed by a warning markets “could be at risk of another computer-driven meltdown”. A CNBC headline said 2017’s market chart looked “eerily similar” to 1987. Does it? Let’s compare. Including dividends, the S&P 500 soared 267 per cent in the five years prior to August 1987, compared to 90 per cent over the last five years. Stocks rose almost 40 per cent in the first eight months of 1987, compared to 2017’s 15 per cent gain.

The mood turned ugly prior to the 1987 crash and volatility sharply increased; today, volatility is near all-time lows. Investors were euphoric in 1987, preferring expensive stocks to risk-free bonds yielding 10 per cent.

Stocks are expensive today but investors are reluctant bulls, feeling they have no alternative to equities due to rock-bottom bond yields. In short: no, 2017 is not like 1987.

Investors are bullish but not exuberant

Sentiment might not be euphoric, but is it getting lopsided? Markets have been setting all-time high after all-time high, and that has triggered an increase in bullishness. The BNP Paribas Love-Panic US index, a contrarian measure tracking a number of sentiment indicators, has hit its highest level since March 2014. Excessively bullish readings suggest stocks are likely to underperform over the next six months, according to BNP’s backtests. Merrill Lynch’s latest monthly fund manager survey confirms the uptick in sentiment, although euphoria remains absent. Cash levels have fallen to 4.7 per cent, the lowest level in 2½ years and well below October 2016’s high of 5.8 per cent.

However, cash remains slightly elevated relative to history. Accordingly, Merrill’s Bull & Bear indicator is at 7.4, still below the 8.0 level that triggers a sell signal. A faster drop in cash levels to 4.2 per cent by 2018 would signal sentiment has become excessive. Retail sentiment surveys echo Merrill’s fund manager survey: bullishness is increasing, whilst remaining well short of extreme levels. Sentiment is picking up, but there’s no irrational exuberance just yet.

Last week marked another minor milestone for the Dow Jones Industrial Average, which crossed 23,000 for the first time. The 1,000-point thresholds “continue to drop like flies these days”, noted Bespoke Investment Group. This was the fifth such crossing since Donald Trump’s election win last November, when the Dow traded below 19,000 (predictably, Trump was quick to tweet about it). Superficially, today’s gains echo the late 1990s, says Bespoke, when the Dow quickly crossed several 1,000-point thresholds. Percentage-wise, however, there’s a big difference between a market going from 6,000 to 7,000 and a market going from 22,000 to 23,000; 1,000 points isn’t the big deal it once was. Still, the Dow’s trajectory confirms the importance of momentum and the short-sightedness of the ‘what goes up, must come down’ thesis. After crossing 19,000, the Dow never closed below that level again, notes Bespoke. After crossing 20,000, it only closed below that level once; it dipped below 21,000 on only two occasions; after crossing 22,000, it never fell below it again. Now conditioned to buy the smallest of dips, traders will be betting the Dow is much more likely to cross 24,000 before the end of the year than it is to fall below 22,000.

When someone talks about “the blacks” and says things like “I am not a racist, but...”, you can be pretty sure you’re about to hear some racist commentary. So it was with Marc “Dr Doom” Faber, who has gotten into hot water after making racist comments in his Gloom, Boom and Doom newsletter.

“Thank God white people populated America, and not the blacks”, Faber wrote. “Otherwise, the US would look like Zimbabwe, which it might look like one day anyway, but at least America enjoyed 200 years in the economic and political sun under a white majority.”

US confederate leaders, he added, were “honourable people whose only crime was to defend what all societies had done for more than 5,000 years: keep a part of the population enslaved”. A regular on financial TV networks and at prestigious investment conferences, Faber’s comments shocked many. However, Morgan Housel from the Collaborative Fund rightly noted Faber has “been a nut for years, with seemingly no impact to his credibility”.

In 2009, Faber was “100 per cent sure” the US would experience hyperinflation. In 2012, he said there would be a third world war within five years. Every year, he says the same thing: a 1987-style crash is coming, buy gold. Apocalyptic, reactionary, one-dimensional: as Housel noted, Faber’s prominence highlights “a broader issue of the craziest people getting the most attention”.