Fiona Reddan: Who would be a first-time buyer in 2021?

With Help to Buy and mortgage applications at record highs will supply be adequate? 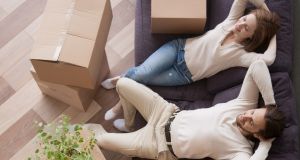 From June to November, Revenue received 10,869 applications for the Help to Buy scheme; up 45 per cent on last year. Photograph: iStock

Here’s a statistic to startle; more than 3,500 would-be first-time buyers applied for the Help to Buy incentive in October to help them buy a new home. But last year, what one might call a “normal” year, only 8,000 new homes were sold on the open market – in the entire year. With construction down this year on the back of the pandemic, supply in the secondhand homes market also falling, and demand apparently buoyant, 2021 could prove to be a tricky year for those hoping to buy their first home.

If there’s one thing that has become increasingly evident as the Covid-19 pandemic has worn on, it is how important where we live is. With so many of us confined to living and working within our four walls, it’s no surprise that those who aren’t entirely happy with their domain are looking to move on. What is surprising perhaps, is the numbers who are in a position to look for their first home.

For every would-be buyer excluded from the housing market because their income has been hit, their job looks uncertain, or their employer availed of the Temporary Wage Subsidy Scheme, it seems there are several more are ready and waiting to buy.

The latest figures show that record numbers were approved for a mortgage in October, with first-time buyers (FTBs) leading the charge. It was the busiest month for approvals since the Banking and Payments Federation of Ireland started collecting the data in 2011, with more than 3,000 FTBs receiving approval for a mortgage, up by 31 per cent on the year.

While a mortgage approval is not the same thing as a drawdown, it’s nonetheless a welcome trend, as it must reflect accessibility to finance for FTBs – and also perhaps the fact that banks started to allow exemptions to the Central Bank’s mortgage rules coming into the autumn.

This jump in demand is also undoubtedly aided by the Help to Buy scheme, which offers a rebate on taxes paid of up to €30,000, or 10 per cent of the purchase price of a property, up to a ceiling of €500,000. For many applicants, the size of the rebate means that they won’t have to save anything for a deposit.

Originally due to run out in December, it was first enhanced in July, and then extended until end 2021 in October’s budget; and it has become increasingly popular.

In the period June to November of this year, Revenue received 10,869 applications for the scheme; a staggering increase of 45 per cent on last year.

If demand needed a helping hand – and one might question that – this is undoubtedly an approach that works. When it comes to matching that demand with supply however, it’s a different story.

Indeed while FTBs – or at least sizeable proportion of them - may have access to the finance they need to buy a home, the challenge will be finding this home.

Earlier this year, expectations were that the supply of new builds could shrink by as much as 40 per cent due to the impact of the pandemic. Given the strength of demand, this could have proved extremely challenging, particularly when you consider that last year, of the 21,000 new homes built, just 8,000, or 38 per cent, were put on the open market.

Figures from the Construction Industry Federation found that the rest were self-builds, scooped up by the State for social housing, or acquired by an investment fund. Indeed 95 per cent of all new apartments built last year were acquired by investment funds.

Good news for FTBs then, that the scale of decline is less than expected, with a similar outturn, of about 20,000 homes, forecast for 2020. The bad news however, is that FTBs will face stiff competition for these units.

All around Dublin, cranes are in evidence building large-scale apartment schemes; most of these will be snapped up by the aforementioned investment funds, who will often pay more than a FTB could. Consider the recent sale of a Dublin apartment portfolio in Beechwood, Stillorgan. The 25 units look set to be acquired by Ireland’s largest landlord, Ires Reit, for €10.6 million, or €424,000 per unit. Similar properties are on the open market for 7 per cent less, at €395,000 for a two-bed.

The big pockets of the investment funds are not the only competitors that FTBs have to contend with. Struggling with a homeless crisis, councils around the country are also in the market for properties, in an effort to boost their housing stock. Dublin City Council for example, is targeting 295 acquisitions next year.

With less choice, FTBs may find themselves opting for a home or location they’re not all that keen on, just to get out of the rental market.

A lack of supply could also be exacerbated by the introduction of the Affordable Purchase Shared Equity Scheme, announced in October’s budget. This is expected to support the purchase of about 2,000 new homes next year – but is likely to boost demand even further.

And as the Central Bank recently warned, this imbalance between housing demand and supply is likely to persist “for an extended period”.

Such an imbalance means the “Covid bargain” has failed to materialise, with prices for FTBs holding up surprisingly well in 2020 (albeit on lower transactions). Despite a softening in the overall market, figures from the Central Statistics Office for example show that the median price paid by a FTB in Dublin in September 2020 was €350,000, compared with €345,000 for the same month in 2019. Nationally, the median price was €277,250 for September 2020 compared with €270,000 in 2019.

All this is conspiring to make 2021 potentially a difficult year for FTBs. Armed with their mortgage approval and Help to Buy application, developers should expect to see plenty of them at their new-year launches.

But they are also likely to be frequent visitors to their banks, looking for an extension to their mortgage approval, as they struggle to find a property to buy.