Fiona Reddan: Do we really need a budget in October? 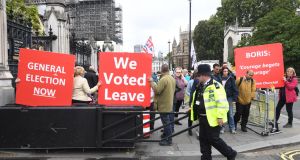 With chaos reigning in Westminster, would it be prudent to put off the budget until there is more certainty on the Brexit front? Photograph: Facundo Arrizabalaga/EPA

The skies above Government Buildings may be mercifully short of kites this autumn, but there appears to be no curtailing of the annual circus around October’s budget despite the Brexit juggernaut picking up speed on the other side of the Irish Sea.

Tax breaks for entrepreneurs, Help to Buy and income tax cuts are all up for discussion as we await Minister for Finance Paschal Donohoe’s pronouncements on October 8th.

But, with a populace possibly more concerned about whether or not they’ll still be drinking Lyons Tea in six weeks’ time, or if they are one of the 80,000 whose jobs could be at risk, or even delighting at the prospect of the return of duty free shopping, it does beg the question. Do we really need to have a budget in October?

An Irish budget is a peculiar thing. Yes, in the UK, the chancellor of the exchequer will show off his little red budget briefcase and garner column inches, but it’s hard to find another country that greets the publication of the Government’s household budget with as much pomp and circumstance.

Without a fully-blown budget day, would people be aware of just how much of a State pension they might be entitled to?

In France, the government’s financial plans are dished up with far less hoop-la and much more deliberation, with budgetary decisions discussed for up to a year in advance before incremental changes are typically made to avoid a “yellow vest” type revolt. In Germany, the setting out of the budget – which started with finance minister Olaf Scholz ’s speech yesterday – is very much a “circular process”, as the Bundestag describes it.

Budgetary plans are discussed in parliament over the course of a week. There’s no magician, no rabbit, and no hat.

Here in Ireland, however, budget day gives the incumbent Government an unrivalled PR opportunity to set out its stall, show just how “grown up” and fiscally prudent it can be, while offering the electorate a little something – even if it often just matches inflation – by unveiling extensive detail on all its planned tax and public spending changes on the one day.

No surprise then, that some argue budget day is an unnecessary and unwarranted farce or spectacle.

Yet, without a fully-blown budget day, would people be aware of just how much of a State pension they might be entitled to? Or how little benefit a much discussed childcare supplement will actually offer a typical family?

The room for manoeuvre for any finance minister is circumscribed. Our budget must come within the constraints of an EU framework

There may be plenty of arguments to keep up the tradition, but the jury may be out this October at least.

With the potential for so much economic uncertainty on the back of a disorderly departure from the EU by the UK, is this really the time to learn that the pint is going to go up by 10 cent or that the benefit in kind exemption on electric cars will be extended, or the threshold for inheritance tax increased by €10,000?

Of course, the room for manoeuvre for any finance minister is circumscribed. Our budget must come within the constraints of an EU framework.

Not so long ago, the budget was held in early December, with a much shorter time frame between the Government revealing any giveaways and the public feeling the benefit in their January wages. If the budget was benign, it set the scene for a bumper Christmas shopping period.

But then the financial crash intervened, and the Government brought forward the date back in 2008 to deal more urgently with deteriorating economic circumstances. It never moved back.

And following the so-called “two pack” agreement of 2013, which aimed to improve budgetary surveillance in the euro zone, new rules now apply anyway. We are constrained by EU budgetary requirements, and, like all other euro zone states, must submit our draft budgetary plans for the forthcoming year to the European Commission and the Eurogroup of finance ministers between October 1st and 15th.

In practical terms, this means the Government has to make its decisions on major budgetary components – such as taxes, capital spending, and social payments – by that date.

Where it has more discretion, however, is on forecasts for individual tax headings – such as corporation tax, capital acquisitions tax and income tax. Clearly, the forecast yield of any tax change is required but not the specifics.

So why not leave them out until we have more certainty?

The Irish Fiscal Advisory Council (IFAC) warns today that a hard Brexit could see a large budget deficit emerge, due to falling taxes and rising unemployment-related costs. The knock-on effect, it says, is that the Government would be forced to cut spending or raise taxes to prevent debt ratios from rising.

So a slight delay in presenting a budget might give the Government that bit more flexibility in setting out its strategy. It’s true that Brexit uncertainty – even if the UK does leave on October 31st – will continue for some time but we might at least know in November whether the exit has been hard or soft.

This is not just a factor for us here in Ireland. In the UK the budget is typically set for a day in October or November, but while the UK government’s spending review was published earlier this month – setting out its spending plans for the next three years – the treasury has yet to confirm a date for the British budget.

And even after the budget day drama, there is always scope for a supplementary budget or wriggle room to wait for December’s Finance Bill to flesh out the finer details of the Government’s fiscal plans.

Yes, a budget in some form must come together between now and October 15th. But whether or not it needs the detail of a typical annual budget day is another question.