Dividends are drying up – but do we really need them? 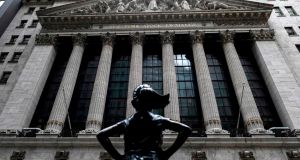 From 1926 through March 2020, dividends accounted for 40.2 per cent of the total return of the S&P 500. Photograph: Johannes Eisele/AFP via Getty Images

The swings of the stock market have been painful enough lately. But on top of the price declines that have kept many investors awake at night, another insult is on the way: stocks will be providing much less income.

That money typically comes in the form of dividends, which usually increase steadily each year. In benign periods for the stock market, it can be easy to believe that this swelling torrent of cash is as dependable as the rotation of the Earth.

But the reality is that dividends are paid at the discretion of corporations. And as companies struggle to conserve enough cash to keep themselves going in the coronavirus recession, one of the things they are cutting is their dividend.

“In a recession, companies curl up into a foetal position and they cut employment, production and inventories,” said Edward Yardeni, an independent market researcher. “They stop buying back their own stock, and then, if they are still bleeding cash, they cut dividends.”

These kinds of cuts can be devastating if you are accustomed to living off the dividends.

Research by behavioural economists such as Richard Thaler, the Nobel laureate, found that many people have used simple rules, or heuristics, to guide their behaviour in benign ways. One is to “never touch the principal” and “live off dividends and interest”, said Jay Ritter, a finance professor at the University of Florida.

But while the interest on bonds must be paid as long as a corporation is a going concern, the dividends may rise, fall or be eliminated, depending on the needs and preferences of corporate management and the prevailing political climate. That, unfortunately, only becomes clear to many people when their dividends have been cut.

“What’s happening to dividends is rough for people who rely on them, but the issue is much less visible than it was a few decades ago,” said Thaler, who teaches at the University of Chicago.

From 1926 through March 2020, dividends accounted for 40.2 per cent of the total return of the S&P 500. But because direct ownership of stock has been declining – while indirect stock ownership, through mutual funds and pension funds, has risen – dividend payments are hidden from view.

In addition, since the early 1980s, stock buybacks have increasingly become a conduit for channelling money into the hands of investors, reducing the role of dividends.

Even so, stock dividends, which flow into mutual funds and portfolios and are reinvested, have continued to play a large role in investor returns over extended periods, said Jeremy Siegel, a University of Pennsylvania economist. “Compounded dividends are amazingly powerful, even if people don’t realise it,” he said.

Indeed, over the 30 years through March, Bloomberg data shows, if you held an S&P 500 index fund, nearly half your total return would have derived from the compounding effect of reinvested dividends. Based just on price appreciation, the index rose 683 per cent in that period; including reinvested dividends, it returned 1,330 per cent.

The flip side of that compounding magic is that dividend cuts will reduce your portfolio returns – or deepen the agony when stocks decline.

During the last financial crisis, for example, from 2007 to 2009, companies in the S&P 500 slashed dividends by a total of 29 per cent, Yardeni estimates. The coronavirus recession is likely to result in dividend cuts of around the same magnitude, analysts say; Goldman Sachs put the projected cuts at 25 per cent. Yardeni said the cuts could be even larger than those of that crisis.

This is no trivial matter. In the S&P 500 alone, annual dividends amounted to almost $500 billion in the 12 months to end-March. That means that investors could collectively lose between $100 billion and $150 billion in dividend cuts in this recession, on top of their losses from stock price declines.

Some companies have simply deferred dividends while others have announced a straightforward cut, but both groups are hoping that this is, at worst, a one-year event, not a portent of a longer-term change of policy.

While airlines were among the first to accept that dividends could not be paid this year, banks have been among the most reluctant to do so. In Europe, many have waited until instructed by their regulators before conceding that dividends policy could not proceed unhampered.

In the US, while banks have announced that they are voluntarily stopping stock buybacks – which were a pillar of the long bull market that ended this year – they have managed to hold the line on dividends, which they reduced or suspended during the financial crisis.

Graham’s most important student, Warren Buffett, has never paid a dividend to his Berkshire Hathaway investors

Yet the Federal Reserve has, until now, allowed the banks to continue paying dividends, despite being major, if indirect, beneficiaries of government bailouts of corporate America.

Jay Powell, the Fed chairman, said last month that suspending bank dividends was not “something that needs to be done at this point”, given that they were “far more highly capitalised, with more high-quality than they were before the financial crisis”.

Janet Yellen, his predecessor as Fed chairwoman, has taken the opposite view, saying in an interview that “if things work out well, banks can distribute income later on”.

Despite dividends’ importance for many investors, and their hallowed status in traditional security analysis – Benjamin Graham, the guru of value investing, gave dividends great importance in evaluating the worthiness of companies – they are not universally regarded as fundamentally important in corporate finance.

In an influential 1961 paper, Merton Miller and Franco Modigliani, two Nobel laureates in economics, said that dividends were essentially irrelevant. Corporate earnings and cash flow are critically important, they said. But whether investors reap those rewards through dividends, stock price appreciation or buybacks is economically insignificant, their work suggested.

As a practical matter, dividends aren’t necessarily crucial, either.

For one thing, Graham’s most important student, Warren Buffett, has never paid a dividend to his Berkshire Hathaway investors. As he explained in his 2013 letter to shareholders, he prefers to retain earnings within the company and use them to generate still greater earnings. If shareholders need money, he said, they can simply sell some of their shares.

“Above all, dividend policy should always be clear, consistent and rational,” he said. “A capricious policy will confuse owners and drive away would-be investors.”

His shareholders have benefited from the enormous return on Berkshire stock.

Investing in steady dividend-paying companies has not been a brilliant strategy over the last 30 years. The so-called Dividend Aristocrats, a group of companies within the S&P 500 that have increased dividends without fail for at least 25 years, have underperformed the overall S&P 500 in that period, according to Bloomberg data. So have investments in companies that pay especially large dividends.

The reason may be central to the very appeal of dividends. To supply a steady stream of income, these companies must reserve substantial sums that might otherwise be used for rapid growth. Of course, many companies now simply cannot grow rapidly. In such cases, they might as well funnel cash directly to shareholders, who could invest it in faster-growing firms.

That’s why I’m largely indifferent to dividends. As Buffett has shown, investors don’t really need them.

But it is terrible that dividends are drying up — along with so many other sources of cash — at a moment when many people need the money most. The lesson is that, in a crisis, dividends are not something you can really count on.