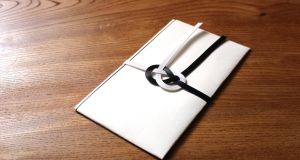 It is standard practice in Ireland that funeral expenses are a charge on the estate. Photograph: Getty Images/iStockphoto

My brother passed away four years ago and I’m trying to sort out his funeral bill. He was married but estranged from his wife for more than two years before he died.

When he passed, he had a life insurance policy and his wages were placed into probate. He did not own property.

His wife has gone missing. She is from the UK so may have moved back. I cannot contact her.

The day after my brother died, my parents received a letter in the front door. It was a copy of his will. It stated that she is the executor. Solicitors had the will checked and it is legitimate.

The funeral home said she renounced her title as executor to the will and we could arrange the funeral. My dad signed for this. Turns out she didn’t and the funeral home is chasing my dad for payment. He’s 85 and doesn’t have €5,000 lying around.

Probate said I don’t have a legal right to basically ask them to pay the bill and the insurance company said the same. I cannot locate her to ask her to sign over executor rights to the family so we can get this bill paid.

I had a solicitor write to the solicitors holding the will and they refused communication saying they are representing my sister-in-law and cannot comment. I don’t have a lot of money myself so hiring a solicitor is too expensive.

I’d be inclined to tell the funeral home to take a run and jump. But it would certainly strengthen your hand in doing so if you were to have anything in writing from them – in the contract or otherwise – confirming their position that the executor had renounced the position.

It is standard practice in Ireland that funeral expenses are a charge on the estate. They are paid from the assets of the dead person as a priority charge. Sorting funeral arrangements is normally the first function of an executor.

And, like all personal debts of the person who has died, it is the responsibility of the executor to ensure that funeral debts incurred are paid – and all assets gathered and accounted for – before the grant of probate that allows what is left to be dispersed according to the will.

The executor’s role is a legal one and not something that can be done in a slapdash fashion or where certain duties – such as allocation of assets in accordance with the will post-grant of probate – can be undertaken while others, such as ascertaining outstanding debt, are ignored.

While I am on the issue of the will, you say that a copy of this document was posted through your parent’s door the day after he died. Sounds pretty heartless but there we are: marriage breakups do funny things to people sometimes.

You must know from this document who the beneficiaries of your brother’s estate are. That might or might not include his parents, or you, I don’t know. But, if it does – or someone close to you – it would be one way of quickly confirming whether probate has been granted and the estate has been dispersed to beneficiaries.

Of course, if the estranged wife is the sole beneficiary – not unusual between spouses, at least if the will was written before times got tough and not later amended – that won’t help as you cannot locate her and, anyway, it appears relations between her and the family are not harmonious.

But you don’t need to rely on such personal contact. As I mentioned in a recent column, the Probate Office keeps a register of estate where probate has been granted, so you can easily determine the state of play.

You need to go to: courts.ie/probate-register-online. There is a search function, which requires the first and last names of the deceased and the year they died – all of which you will clearly have to hand.

If probate has not been granted you should, in the first place, send the funeral bill to the solicitor representing your sister-in-law – but do keep a copy.

In that situation, you should also consider challenging her for her failure to carry out her duties. She has one year after the death to do so: after that, she needs to show, if challenged, that any further delay was reasonable. Again that would involve a solicitor’s letter to her solicitor as you do not have an address for her.

Ultimately, this could end up a court matter so, at some point, if there is no information or clarity forthcoming from her or through her solicitors, you need to figure out whether that is financially doable – or even whether the stress and cost makes addressing the bill in other ways a better option.

There is a code of conduct for funeral directors and it involves respect for the grieving and clarity on arrangements, particularly on cost.

In my experience, it has always been the case that funeral directors would inquire whether bills should be directed to the deceased’s executor or personal representative. Ideally, they would want to talk to that person – normally a close family member – to confirm: they would certainly want contact details.

But even in such a case, the basic funeral cost is a charge on the estate and the responsibility of the executor who cannot simply disengage – even if the family has indicated they are happy to shoulder a financial burden for some additional services provided.

But that doesn’t seem to have happened here. The funeral directors told your father the executor – your brother’s former wife – had “renounced her title”, or role. They simply could not have known that. Unless they took her word for it which they should not have done. And, as it happens – at least according to your brief interaction with her solicitor – it appears that she has not.

They appear to have misled your elderly father who was at the time already over 80 years of age – deliberately or otherwise – into believing his daughter-in-law would not fulfil her duties as the person responsible for funeral expenses. In that case, if he was thinking straight at all in the circumstances, your father’s reasonable assumption would be that a family member would take up the role of executor or personal representative, and that they would ensure the expenses were met from the estate.

If your brother’s estranged wife did want to renounce her role, my understanding is that she would have had to get a document saying so signed by two independent witnesses – ie people not involved in the management of the estate or beneficiaries from it – and submitted that to the Probate Office.

At that stage, the Probate Office would be open to a family member seeking a Grant of Letters of Administration with Will Annexed which essentially would mean that they take over the executor’s duties.

Critically, anyone who renounces a role of executor cannot subsequently seek to become involved again in the role with regard to that estate. So, if your sister-in-law had renounced, that’s it – she could not just change her mind later on.

This is important because I get the sense from what you say about your interaction with her lawyer, that the solicitor at least is not clear that she has renounced her role.

The solicitor is correct that their duty is to their client but if she had renounced the role of executor (and therefore cannot seek to regain it), I would expect that the lawyer would at least be able to confirm that. That they have not would seem to indicate that she continues to be executor.

I suggest your next move is to write to the funeral directors. The letter should state that the family was misinformed by the funeral directors, that the executor was renouncing her role, that it is your understanding she has not renounced the role and is therefore responsible for the expense. In the absence of personal contact details, suggest that they forward the bill to her solicitor in her name as executor of the estate and give their address.

My fear is that if there is nothing in writing, the executor cannot be found and the funeral director has a contract with your father’s signature on it – and no one can entertain the potentially significant costs in pursuing a possibly futile legal action – he could be on the hook for this one. But I certainly would not concede that at this stage.

5 Denis O’Brien’s media departure: ‘No politician will shed any tears’