Budget 2019: Families look to roll back the austerity years 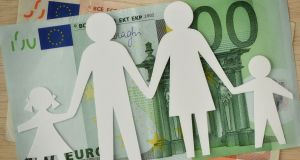 A survey of typical families across the State – compiled by PwC – shows that income after tax remains down across eight cohorts of households.

A decade on from the dawn of the financial crisis, households across the State still bear the scars of the years of austerity that followed.

Decisions to introduce the universal social charge (USC), a levy on public-service pensions and the local property tax, and to cut benefits such as children’s allowance and abolish the PRSI ceiling, continue to have a lingering effect on our disposable income.

“Ten years on from the financial crisis, the taxpayer is still paying a heavy price, with net incomes still down in comparison to 2008 figures,” says Ursula Matthews, a senior manager in PwC.

Household wealth may be at a new high, as figures published recently by the Central Bank show, but people still don’t have as much money as they used to have in their pockets, and taxation is a big reason why.

As our survey of typical families across the State – compiled by PwC – shows, income after tax remains down across eight cohorts of households. The worst hit is higher earners, whose income is down by almost 9 per cent on 2008. Perhaps surprisingly, it is pensioners on a combined income of €48,000 and single-income or “squeezed middle” families on €57,500 that have fared the best, with income down by less than 3 per cent.

If we take a different look at the figures, however, and consider the “recovery” since the last of the austerity budgets in 2014, we see that all our households have enjoyed an improvement of sorts in their household incomes.

Indeed, our beleaguered “squeezed middle” family has actually seen its income rise by 4 per cent or more over that period. Everyone else has seen their incomes rise too.

And a further improvement might be on the way in Budget 2019.

“An increase in the standard-rate cut-off point, and an adjustment of the USC rates/bands would be positive steps in rectifying this,” says Matthews, adding that she also expects some “positive steps” to be taken to address both the supply and the cost of rented accommodation.

But before we find out how our budget families are going to fare next Tuesday, let’s consider just how the past 10 years have impacted their finances.

As our table shows, higher earners – and in this context, with an annual income of €250,000, they could be classified as “very high” earners – have lost the most in their monthly pay cheque.

Our higher earners, accountants Frank and Alison, who have two children, are now bringing home €1,187 less each month, the biggest financial decrease, as well as the biggest proportional decline, because their monthly income is almost 9 per cent less today than it was back in 2008.

This is primarily because the rate of tax on their income has steadily risen, on the back of a series of austerity budgets – and has not yet sufficiently eased. Back in 2008, for example, this couple’s effective tax rate was just 35.7 per cent. Fast forward to 2018 and it has jumped to 41.4 per cent – a near 16 per cent increase in the period.

Unsurprisingly, given the value of their home, they are concerned about any changes to the local property tax. They are currently benefiting from a 15 per cent reduction adopted by the local authority. If the tax was to be valued on today’s property prices, it would be worth closer to €2.5 million, so their bill would almost double to €4,717 a year.

Interestingly, however, the decline in their take-home income is not down to income tax; they are actually paying €732 less a year in income tax, thanks to the decrease in the higher rate of tax to 40 per cent in recent years. Their higher tax burden is rather down to higher rates of PRSI, as well as USC, being imposed on them.

The family’s income has improved since it hit a low in 2014, however, and they are now up by about €389 a month from that point, as austerity measures started to ease off.

Nonetheless, the figures might still give the Government some pause for thought when it comes to deciding whether to increase the tax burden of this cohort even more. One option under consideration would target higher earners by tapering the PAYE credit on income of more than €80,000. If the 8.25 per cent taper were applied to income of between €100,000 and €120,000, for example, someone earning €110,000 would end up paying tax at a rate of 60.25 per cent on some of their income.

It might also make the Government think twice about introducing a third rate of tax on higher earners. According to figures prepared by the Revenue Commissioners, the Government could raise €433 million by introducing a 43 per cent income tax rate for workers earning more than €80,000 a year, or €280 million a year if it opted to levy the higher rate only on earnings of more than €120,000.

Our other dual-earning couple, Co Louth-based hoteliers Mark and Linda, who have an annual income of €175,000, also lost a proportionately greater slice of their income over the past 10 years. They are down by €673 a month, or by 7 per cent since 2008, although have recovered €328 a month since 2014.

While Brexit and what it might mean for the hotel they own in Co Louth is a key concern for the couple, Mark is also keeping an eye on the earned income tax credit and the potential USC/PRSI merger.

And beyond their personal taxes, their hotel business is likely to be facing a higher VAT bill.

It might surprise but, according to the figures from PwC, our single-income squeezed-middle family, Fred and Ellen, with earnings of €57,500 a year, have fared better than anyone else we looked at over the past 10 years.

However, there is a very specific reason for this; the couple boosted their income by €10,000 a year thanks to the rent-a-room scheme. This is within the current tax-free limits so they receive this amount tax free on top of Ellen’s salary.

Of significant concern to this couple is whether or not the Government makes any changes to this scheme, as well as their hope that it will ramp up the affordable childcare scheme. At the moment it makes no sense financially for Fred to be working, due to the cost of childcare.

This is also true given that the couple have seen a hefty decrease in the tax-free child benefit payment they enjoyed each month. Back in 2009 this was paid at a rate of €166 per child: today it’s down to €140.

Our couple, Leslie and Kitty, who are in their late 70s, depend on an occupational pension of €22,000 as well as the State pension and deposit interest to fund their retirement. While the latter has fallen in recent years due to the impact of historically low interest rates, the couple have benefited from increases in the State pension which has helped to keep their income steady over the past 10 years.

The figures also shine a light on how landlords have fared in recent years. Our civil partners, David and Brian, have two rental properties in Ranelagh, with each bringing in about €1,500 a month in rental income, or a total of €36,000 a year.

They are hopeful that the Government will do something to reduce the burden on landlords on budget day, as increasing tax relief on mortgage interest to 85 per cent hasn’t really helped.

Nurses, teachers and civil servants felt the brunt of the downturn more quickly than most; after all, the levy on public-sector pensions was introduced back in 2009, one of the first steps taken to try and stabilise the economy.

Indeed, Tom, a primary school teacher who is single, saw his income drop by about €88 a month as early as 2009 due to the introduction of the levy. It continued to fall until it hit a trough of €2,319 back in 2014. Now it’s on the up again, although the pace of recovery hasn’t been as fast as Tom might have liked.

He would like to see an increase in the standard-rate cut-off point next Tuesday, to bring his income within the standard rate band. That would see him pay tax at a rate of 20 per cent on all of his income.

Losing €80 a month might not hit someone like our very high-earning couple, but, for our low-income single worker on €22,000 a year, it is a sizeable loss. A single worker on this salary is down by 4.6 per cent on their 2008 salary, although has recovered about €45 since 2014, so is almost halfway back to clawing back the losses.

Still though, our low-income worker, hairdresser Rebecca, is keen to see what the Government might do with the tax bands and USC/PRSI, as she doesn’t feel that she should have to pay so much of these at such a low level of income. She’s also worried about rising rents, as she rents a one-bed apartment in Kildare for €650.

1 Abtran challenges award of €63m contract by Irish Water to rival company
2 Pilita Clark: When a rude boss keeps you waiting, why not walk out?
3 Money matters: ‘My father embarrassed us with his haggling’
4 US threatens retaliation against EU over proposed carbon tax
5 Airbus poised for deal with regulators to settle corruption probes
6 Are there annual limits on inheritances or gifts to a child?
7 Ryanair to pay portion of Peter Bellew’s legal costs, court rules
8 High costs and low returns will fuel nursing home shortage - CBRE
9 Little strategic thinking in election manifestos of Fine Gael and Fianna Fáil
10 Cost of building a new family home rose 7.5% in past year
Real news has value SUBSCRIBE
Save money on international transfers