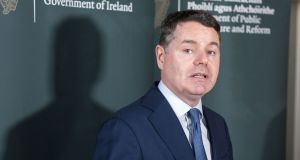 The Covid-19 pandemic will undoubtedly have a major impact on the Irish economy, but it’s only the current financial crisis: others lie in wait if the State doesn’t tackle them. That’s the stark warning of the Irish Fiscal Advisory Council, which highlights the Republic’s ageing population and suggests the current age of retirement is unsustainable.

Colin Gleeson reports on the budgetary watchdog’s warnings, while Dominic Coyle explores the likely implications for the State pension age.

Amid its ongoing salvos against the Government’s quarantine rules, Ryanair has signalled that it will cut 1,000 flights from its Republic-UK schedules in August and September, while Aer Lingus is also cancelling some flights to European destinations. Barry O’Halloran reports.

Completing a trilogy of aviation stories, the boss of aircraft leasing giant Aercap claims the Republic risks becoming the European equivalent of North Korea on air travel because of its “outlier” restrictions.

In other transport news, the State is set to provide grant aid to commercial bus operators affected by the pandemic, reports Martin Wall.

Today is the big day for the €13 billion Apple tax case, with the General Court of the European Union due to deliver its judgment on whether the tech giant had a favourable tax deal with the State. Cliff Taylor looks at the possible outcomes, some of them messy.

In this week’s commercial property section, Ronald Quinlan reports on Marlet’s €46 million sale of apartments in Dublin’s docklands and the latest on the row between developer Johnny Ronan and the historic Grafton Street cafe Bewley’s.

1 Owner of Dundrum Town Centre to sell prized assets
2 Pilita Clark: Working from home is starting to pall
3 Can a first-time buyer get relief on a buy-to-let home?
4 Thousands back petition demanding State aid for Aer Lingus
5 Over half of Ireland’s businesses in decline following Covid-19 lockdowns
6 Microsoft to press on with TikTok deal talks after call with Trump
7 Law governing construction pay rates remains pending State appeal
8 HSBC warns loan losses could hit $13bn as profit plunges 65%
9 Oprah wore my dress to the Oscars to pick up a lifetime award
10 ‘I think cash is a thing of the past’
Real news has value SUBSCRIBE