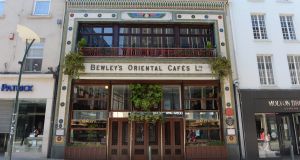 While the dispute between the parties is due to go to mediation on July 20th, an affidavit by RGRE chief executive Rory Williams, which was opened before the High Court earlier this week, shows that Mr Ronan gave Bewley’s the option of buying the Grafton Street building, or of allowing a new operator to trade from the premises under the Bewley’s name.

The developer made the offer in an email addressed to Bewley’s owner Patrick Campbell, on May 12th last, just six days after the company wrote to its Grafton Street staff to inform them that it “is likely to be necessary to permanently close the cafe over the coming weeks” and that the “proposed closure would result in the loss of all jobs in the cafe”.

Having expressed his disappointment at Bewley’s announcement of the Grafton Street cafe’s imminent closure in the absence of what he termed “meaningful engagement” to “save” it, Mr Ronan said: “It wasn’t so long ago that one of your advisers boasted of you having €20 million cash on account with Davy Stockbrokers and wondering if I would be interested in selling you the building. Well, OK. If that is going to save the cafe and you are willing to pay the full market value for the building I will sell it to you and you can save the business by allowing it to operate rent-free.”

Clearly aware that this offer was unlikely to be taken up by Mr Campbell, the developer added: “If you are not prepared to save the company (if indeed you really are to cease trading) and the 110 jobs hanging in the balance, then will you allow the Bewley’s Cafe/name to be saved? If you will transfer the cafe rights in the name and agree to leave the cafe substantially as is (which the lease obliges you to do in any event), I will do my utmost to secure a top class cafe operator to trade in the premises under that name as it did under its original owners.”

While a spokesman for Bewley’s declined to comment on the content of Mr Ronan’s email, they said the company looked forward to the commencement of the mediation process with RGRE.

The spokesman said: “Bewley’s Cafe Grafton Street Limited confirms that it has entered into mediation talks with its landlord, RGRE Grafton Limited, in an effort to resolve a number of outstanding matters in dispute between the parties, including a review of any concrete proposals about the future of the café to be presented by the landlord. Bewley’s looks forward in anticipation to the mediation process and as such it would be inappropriate to comment about these matters outside of the mediation forum.”

RGRE Grafton Ltd, a company controlled by developer Johnny Ronan, had initiated High Court proceedings earlier this month against Bewley’s Cafe Grafton Street Ltd for summary judgment of €747,000 over alleged rent arrears and for possession of the premises. The annual rent amounts to approximately €1.4 million, to be paid on a quarterly basis.