Paradise Papers: What have we learned so far this week? 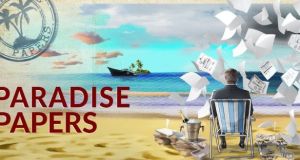 The more than 13 million Paradise Papers documents leaked to the International Consortium of Investigative Journalists have shed light on the offshore dealings of some of Ireland (and the world’s) wealthiest and most powerful people and biggest banks.

The Queen of England, Donald Trump’s secretary of commerce, U2 frontman Bono, some of the Mrs Brown’s Boys cast, businessmen Denis O’Brien and Sir Anthony O’Reilly are among the names featured in the files.

Here is what we have learned:

– Apple may still be using Ireland to avoid tax on the billions of euro it earns outside of the US. A complex reorganisation combined with changes in Irish law mean the multinational may still be writing off profits against intellectual property held here.

– The offshore arm of AIB, Ireland’s largest bank, continued to target Irish customers who wanted to avoid paying tax even after its parent had been bailed out at a cost to the public of €7 billion, leaked documents show.

– U2 frontman Bono has made a number of property investments via offshore entities. They include a shopping centre in Lithuania and an office building in Germany.

– Three actors with the highly successful Mrs Brown’s Boys comedy were paid through an offshore structure that sheltered them from paying income tax on hundreds of thousands of euro each. One of the actors said he had to Google tax avoidance to see what it meant.

– Irish businessmen Denis O’Brien, Jerry Kennelly and Ray Nolan have all bought private aircraft using the Isle of Man which has one of the world’s largest offshore private aircraft registries on the back of an attractive VAT scheme.

- The Criminal Assets Bureau (CAB) has sought documents from AIB’s offshore arm as part of its investigation into transactions between businessman Denis O’Brien and former minister for communications Michael Lowry that featured in the Moriarty Tribunal.

– Businessman Sir Anthony O’Reilly established a trust in Bermuda in 1998 for the benefit of his daughters but and told its administrators not to tell them of its existence. At one stage it was the majority shareholder in providence resources.

– US Republican and Democrat donors had extensive offshore dealings.

– A firm co-owned by Vladimir Putin’s son-in-law made substantial payments to the shipping group of the US commerce secretary, Wilbur Ross.

– Twitter and Facebook received hundreds of millions of dollars in investments that can be traced back to Russian state financial institutions.

– The London-listed multinational Glencore made a secret loan to an Israeli billionaire in its efforts to secure lucrative mining rights in the Democratic Republic of the Congo.

Other revelations from our ICIJ partners

- Millions of pounds from the Queen’s private estate has been invested in a Cayman Islands fund – and some went to a retailer accused of exploiting poor families.

- Prince Charles’s estate made a big profit on a stake in his friend’s offshore firm.

- Oxford and Cambridge and top US universities invested offshore, with some of the money going into fossil fuel industries.

- The Dukes of Westminster pumped millions into secretive offshore firms.

- A tax haven lobby group boasted of “superb penetration” at the top of the UK government.

- Celebrities from Harvey Weinstein to Shakira had offshore interests.