Colm Keena reports on how members of the "Mrs Brown's Boys" cast utilised a tax avoidance scheme, as revealed by the Paradise Papers. Video: Enda O'Dowd 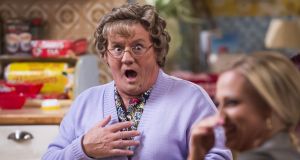 Agnes Brown (Brendan O’Carroll) and Betty Brown (Amanda Woods) in the Mrs Brown’s Boys 2016 Christmas special. The offshore scheme was not used by O’Carroll or his wife Jennifer. A trust was set up for Woods but she never made use of the scheme.

Three actors with the highly successful Mrs Brown’s Boys comedy were paid through an offshore structure that sheltered them from paying income tax on hundreds of thousands of euro each, documents in the Paradise Papers show.

The actors who made use of the structure are Fiona Delany, daughter of the show’s creator, Brendan O’Carroll, who plays Maria Brown, and her husband, Martin, who plays Fr Trevor Brown. A third actor, Paddy Houlihan, who plays Dermot Brown in the highly successful comedy was also paid through the scheme.

Money linked to the show was paid into funds in Mauritius owned by trusts operated by the Appleby offshore law firm, and the actors were then able to “borrow” from the funds. There is no evidence in the documents of the actors repaying any of the borrowed money.

Over the period from 2014 to earlier this year, each of the actors borrowed hundreds of thousands of euro from the money deposited offshore, on which no income tax had been paid, while not complying with the apparent repayment terms. Total deposits to the offshore funds appear to have been greater than €1 million.

Trusts were also set up for Mrs Brown’s Boys actors Daniel O’Carroll, who plays Buster Brady, and his wife, Amanda Woods, who plays Betty Brown, but the couple never made use of the scheme, the leaked documents show.

I was told the money went to a trust and it wasn’t mine until I received it, and I didn’t have to pay any tax until I got the money

The tax scheme involved the actors being able to charge certain expenses to credit cards issued by AfrAsia Bank in Mauritius, in relation to expenses incurred from their work as “investment consultants” to their own trusts. Expenditure on the cards was then cleared with the money in the offshore funds.

In a 2013 application form for his US dollar credit card, Houlihan gave his annual income as €600,000, the leaked files show.

Documents from the Appleby offshore law firm were leaked to Süddeutsche Zeitung and shared with the International Consortium of Investigative Journalists, of which The Irish Times is a media partner. Appleby (now Estera) Trust Ltd in Mauritius provided services to the tax scheme.

Houlihan gave a lengthy interview to The Irish Times in which he said the funds deposited offshore were connected to his stage work for Mrs Brown’s Boys and not the TV programmes. He said he was also speaking on behalf of the other two actors. He also said it was always his understanding that the loans would eventually be repaid, and tax paid on the money in the funds when it was transferred from the trusts to the actors.

As well as the stage performances, the actors were also earning substantial sums from the hugely successful TV show, which is produced by the BBC in association with RTÉ and BOC-Pix Ltd, as well as from DVD sales and repeats of the programme which sell around the globe. This money was paid and taxed in the usual way, according to Houlihan.

The actors were introduced to the elaborate scheme by English accountant Roy Lyness, who does the accounts for the Mrs Brown’s Boys operation and for Brendan O’Carroll. Lyness himself had his own Mauritian trust.

Lyness was in the news in 2012 in relation to a tax scheme called K2, which was used by the broadcaster and comedian Jimmy Carr, and caused a huge scandal in the UK. The Appleby scheme resembles the K2 scheme and the one used by footballers with Glasgow Rangers, which is being examined by the UK revenue.

The Mauritian scheme was not used by Brendan O’Carroll or his wife Jennifer, who both star in the Mrs Brown’s Boys productions and own the business.

The funds that were transferred to Mauritius were part of the income the agency that represented the three actors, an English company incorporated in 2012 called Pro Fid Ltd, was paid for the actors’ work on stage productions of the award-winning comedy, according to Houlihan.

Brendan O’Carroll said he was assured at the time by Lyness that the scheme was legal. What happened afterwards to the money paid by his company to Pro Fid was not his responsibility, he said.

He said neither “myself, my wife, or any company associated with Mrs Brown’s Boys are now or ever have been involved in any tax avoidance scheme.” The couple live in Florida, in the US. The three actors live in Dublin.

“I was told the money went to a trust and it wasn’t mine until I received it, and I didn’t have to pay any tax until I got the money,” Houlihan said in a lengthy interview with The Irish Times.

He said he was able to borrow from the trust and was told he would have to pay the loans back but “I wasn’t sure when that would be.”

Lyness said he could not discuss his clients’ affairs and did not want to discuss how the tax scheme worked.

The scheme involved the services of a firm called PFS, which has offices in Mauritius and a mailing address in London. PFS, which uses the logo Think Financial Freedom, works with the Appleby offshore law firm, which provides services in Mauritius to the trusts set up for the actors.

Requests for a comment from PFS and Appleby in Mauritius were unsuccessful. John Puet, who controls Pro Fid, hung up after he was contacted by The Irish Times.

Houlihan said the money he had in the trust suddenly appeared in his Irish bank account about two weeks ago, after The Irish Times and other media organisations began making inquiries of PFS and of Appleby in Mauritius. He said he wasn’t sure if the money was net of the loans he had taken out, but he thought that it was.