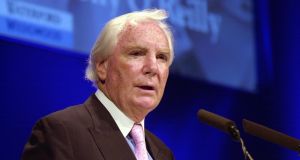 Sir Anthony O’Reilly: established the Foundation Trust, which was earlier called the Daughters Trust, in Bermuda in 1998. Photograph: Brenda Fitzsimons

Businessman Sir Anthony O’Reilly established a trust in Bermuda in 1998 and told its administrators not to contact its beneficiaries, his daughters, as they had not been told of its existence.

Details of the Foundation Trust, which was earlier called the Daughters Trust, are contained in the Paradise Papers, documents leaked from the Appleby offshore law firm.

They show the trust was established by Sir Anthony in August 1998 using the services of Appleby’s office in Bermuda, and with tax adviser Robert Hottle in the US as a primary contact.

Mr Hottle is a partner with the Virginian firm Baker Tilly Virchow Krause, which, according to its website, “focuses on providing comprehensive tax and financial advice to high-net-worth individuals, wealthy families, corporate executives and closely-held corporations.”

Sir Anthony’s daughters Susan, Justine and Caroline are listed as the beneficiaries of the trust, which is described as being the majority shareholder of the Irish listed company, Providence Resources. The trust’s protector is Bermudan company Lion Corporation. At a later stage the American Ireland Fund was added as a beneficiary.

The documents indicate that among the assets held by the trust were a deposit of $5.68 million with the brokerage NB Zoullas. In 2005 an unsecured loan of $5.5 million was issued to Sir Anthony by the trust.

The former chief executive of the Heinz Group in the United States, Sir Anthony was the most successful Irish businessman of his generation and was reputed to be Ireland’s first billionaire. He was for a long period the largest shareholder in Independent News & Media (INM) before losing that position to Denis O’Brien. During his time with Heinz he was reported to be the highest-paid executive in the US. Attempts to contact him were unsuccessful.

A court in the Bahamas, where had a home for a long time, ruled him a bankrupt in November 2015, at a time when he was also being pursued through the Irish courts about debts owed to AIB.

Sir Anthony’s financial position suffered when his shares in INM collapsed at the same time as his attempt to rescue Waterford Wedgwood, which he had long supported, failed.

In an effort to stave off his banks, he was forced to sell his house on Dublin’s Fitzwilliam Square and his family holiday home in Cork, among other assets. This followed a judgment for €22.5 million granted to AIB against him in June 2014.

His former home, Castlemartin, in Kilcullen, Co Kildare, has also since been sold.

The Paradise Papers are documents leaked to Süddeutsche Zeitung which were in turn shared with the International Consortium of Investigative Journalists in Washington DC, of which The Irish Times is a media partner.