Paradise Papers: Apple says it changed residency of its Irish subsidiaries but insists move did not reduce tax payments 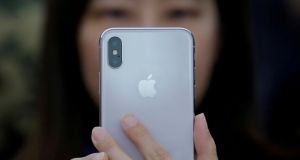 It has emerged that after Ireland changed its laws, Apple made one of the three “stateless” companies resident in Ireland and the other two in Jersey. Photograph: Thomas Peter/Reuters

Apple may still be avoiding tax on the billions of euro it earns outside of the US thanks to an Irish-based tax structure. Documents on the multinationals tax affairs contained in the Paradise Papers give details of how the iPhone maker reorganised its tax affairs in the wake of a clampdown by Ireland driven by international pressure in 2013.

At the heart of the original scheme were three “stateless” Irish subsidiaries that did not have to pay tax anywhere in the world. It has emerged that after Ireland changed its laws, Apple made one of the three “stateless” companies resident in Ireland and the other two in Jersey.

The complicated reorganisation, combined with changes to the Irish law on how companies can write off profits against intellectual property introduced by former minister for finance Michael Noonan at the end of 2014, mean that Apple may still be able to avoid billions of euro in tax on its earnings outsides the US, experts say.

The company confirmed to The Irish Times that it had changed the residency of its Irish subsidiaries and added that the move did not reduce its tax payments. Apple said it paid €1.27 billion in tax in Ireland over the past three years.

The Paradise Papers refer to millions of records obtained by the The International Consortium of Investigative Journalists, which includes The Irish Times, from two offshore services firms based in Bermuda and Singapore as well as from 19 corporate registries maintained by governments in jurisdictions that serve as waystations in the global shadow economy.

The records show how well know know tech entrepreneurs Jerry Kennelly and Ray Nolan avoided paying VAT on a $4.5 million private aircraft they bought in 2016 using an Isle-of-Man linked structure. The plane was imported from Switzerland and, after a two-hour stop over in the small island in the Irish Sea, was able to fly anywhere in the EU. Businessman Denis O’Brien also bought a jet through the the Isle of Man.

The Government yesterday sought to keep the focus firmly on the OCECD as a way of combating international tax avoidance in the wake of the revelations.

“We will absolutely support tax transparency internationally and we’ll do that through the OECD and at the same time at the European level we will absolutely defend our tax sovereignty,” Mr Varadkar said.

He said he understood that both AIB and Bank of Ireland had closed international subsidiaries that were named in the Paradise Papers but added: “Obviously this is a story that’s evolving and we’ll keep close attention to it.”

Speaking in Brussels, where he is attending a meeting of EU finance ministers, Mr Donohoe said he had spoken to the chairman of the Revenue Commissioners about the revelations.

“He has informed me that the Revenue Commissioners will be reviewing the papers over the coming days to see if any further action is warranted,” he said.

European Union states will today discuss plans for a tax havens’ blacklist, officials said, in a bid to tackle offshore tax avoidance. The subject’s inclusion on the monthly meeting’s agenda of EU finance ministers came after the release of the Paradise Papers.

The investigation revealed that U2 frontman Bono made a number of property investments via offshore entities including a shopping centre in Lithuania and an office building in Germany. He reacted yesterday after Lithuania’s tax authorities said they were preparing to examine the details of the business over concerns that it unlawfully avoided profit tax.

In a statement, Bono said he would be “extremely distressed if even as a passive minority investor ... anything less than exemplary was done with my name anywhere near it”.

Christian Aid Ireland described the leaked documents, which centre around the offshore law firm Appleby, as “further evidence of a rotten system” designed to “entrench wealth and privilege in the hands of a few”.

Oxfam called for the Government to implement EU proposed reforms including the creation of a “blacklist” of non-tax compliant countries.

June Tinsley, of children’s charity Barnardos, said tax avoidance in Ireland had contributed directly to the rise of child poverty in the last decade and that the shortfall in tax revenue had increased austerity cutbacks.

In the United States, president Donald Trump’s commerce secretary Wilbur Ross said there was “nothing improper” about his business links to Russian figures currently under US sanctions revealed in the Paradise papers.