Bono has interest in a shopping centre in Lithuania, Paradise Papers reveal

U2 frontman has made property investments via offshore entities

Investments by Irish musician Bono, made under his real name Paul Hewson, in a Lithuanian shopping centre and a German office building - by way of a Maltese company - have been revealed in documents shared with The Irish Times. 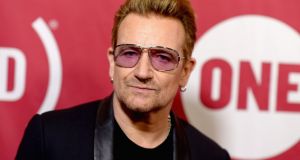 Bono attends a ONE Campaign event in New York in 2015. Photograph: Dave Kotinsky/Getty

U2 frontman Bono has made a number of property investments via offshore entities. They includea shopping centre in Lithuania and an office building in Germany.

Details of the investments emerged by way of Bono’s shareholding in a company in Malta called Nude Estates Malta Ltd.

The Paradise Papers, files obtained by German newspaper Süddeutsche Zeitung and shared with ICIJ, The Irish Times and, and more than 90 other media organisations in 67 countries, include documents from 19 corporate registries around the globe.

The wealthy singer - under his real name Paul Hewson - has an interest in a shopping centre in Utena, a town with a population of approximately 30,000 in the north east of the Baltic EU member state.

He also has an interest in a modern office block, Silberpalais, in Duisburg, which is the world’s largest inland port and is located near Dusseldorf, in Germany.

The shareholding in the Lithuanian property was at one stage owned by way of the company in Malta but more recently has been held by way of a company in the British crown dependency of Guernsey.

The Maltese company, which was owned equally by Bono, McKillen and Robin Barnes of St Martins, Guernsey, was incorporated in 2006 and placed into liquidation in 2012. The company’s accounts for 2010 say it sold its Lithuanian subsidiary for £1 in February 2009.

The Lithuanian company is now owned by Nude Estates 1 Ltd in Guernsey. A related company, Nude Estates Ltd, also in Guernsey, owns the Duisburg building. Called the Silberpalais, the building is, according to its website, Duisburg’s largest office block with a total floor space of 69,000 square metres.

Bono is also a well-known activist and has campaigned on issues such Aids and extreme poverty in Africa. He is the cofounder of ONE, a global campaign and advocacy organisation with more than 7 million members committed to taking action to end extreme poverty. As part of his work with ONE, Bono has lobbied heads of state and members of legislatures all around the world.

Offshore locations such as Guernsey facilitate the creation of companies that will be difficult, or impossible, to trace back to their owners. While having an offshore entity is legal, the built-in secrecy attracts those want to operate in the shadows. Offshore companies, often a “shell” with no employees or office space, are also used in complex tax avoidance structures that drain billions from national treasuries, often from some of theworld poorest countries.

The offshore industry makes “the poor poorer” and is “deepening wealth inequality,” said Brooke Harrington, a certified wealth manager and Copenhagen Business School professor who is the author of “Capital without Borders: Wealth Managers and the One Percent.”

“There is this small group of people who are not equally subject to the laws as the rest of us, and that’s on purpose,” Ms Harrington told the ICIJ. These people “live the dream” of enjoying “the benefits of society without being subject to any of its constraints.”

1 Fair deal? Family at odds with hospital and each other not so sure
2 Ten of the most mysterious aircraft disappearances
3 EU farming subsidies deal criticised as insufficiently green
4 Central Bank finds litany of shortcomings in fund firms
5 AIB settled Citigroup dispute over Rusnak at fraction of $872m claim
Real news has value SUBSCRIBE