Investments in INM, Topaz and Siteserv made via Isle of Man companies 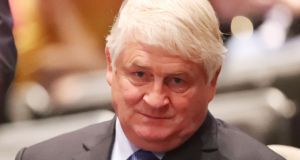 Many of the business activities of wealthy businessman Denis O’Brien are conducted by way of companies in the Isle of Man which are in turn controlled by two trusts there, the Paradise Papers show.

These companies have played a role in Mr O’Brien’s investments in Ireland, including his shareholding in Independent News & Media (INM), his purchase and then sale of Topaz, and his purchase of Siteserv.

The Isle of Man is a British Crown dependency with a population of less than 84,000. It has a zero corporation tax rate, no capital gains tax, no wealth tax, stamp duty, or inheritance tax.

The two O’Brien family trusts are called the Harcourt Trust and the Wellington Trust. When they were established is not known, though the latter trust featured in evidence to the Moriarty Tribunal concerning events that occurred in 1998.

O’Brien’s Isle of Man company Kendrick Investments was used when the businessman took over the Topaz chain of forecourts in 2013 after buying its debts from the Government-owned Irish Bank Resolution Corporation (IBRC). The business was sold to Canadian fuel retailer Couche-Tard last year, reportedly at a handsome profit.

Another Isle of Man company, Baycliffe Ltd, was used for O’Brien’s investment in INM. It was also used for his stake in Australian media company APN, which he sold for about €80 million in 2015. Baycliffe was also used for stakes in businesses Sterling Energy, One51, and the BB’s Coffee and Muffins chain.

Isle of Man company Millington Ltd was used for the 2012 purchase of Siteserv by O’Brien from the IBRC. Appleby acted for Isle of Man company AC Executive Aircraft (2013) Ltd in relation to the purchase a Gulfstream G650 jet. The use of the jet was sometimes paid for by O’Brien’s Caribbean telecoms group, Digicel. O’Brien’s business involves a large amount of air travel.

The leaked files show that the Wellington Trust owns Baycliffe and another of O’Brien’s Isle of Man companies, Thanehurst. Appleby has also provided services to Isle of Man companies Palmdown Ltd, Grapedown Ltd and Oaktree Holdings Ltd. Grapedown was used to buy a house on Shrewsbury Road, Dublin, in 2005. Palmdown was used in the Siteserv investment.

Appleby has acted at the request of William Fry solicitors, Dublin, in relation to security on multi-million dollar loans to Aergo SA One Ltd, a Dublin company that is part of O’Brien’s Aergo Capital aircraft leasing business, which he sold in 2014 and which in turn had links to Thanehurst.

The law firm also acted for Mr O’Brien in relation to the opening and operation of bank accounts in Ireland in the name of Isle of Man company Blaydon Limited.

Blaydon is an investment holding company, the one issued share of which is held by an Isle of Man nominee company, IOMCSL Nominees Ltd. The directors are Brendan Hayes and Mark Polychronakis, of IOMSCL. The leaked files show the issued share is held in trust for Mr O’Brien.

A 2015 document produced by Barclays Wealth Trustees says that Blaydon operated as a nominee for Denis O’Brien in relation to a number of bank accounts in Ireland that received and paid out “large sums (around €2 million per month at times).”

The payments were received and authorised by Mr O’Brien or by his private office, with the ability of one person in the office to sign the mandate, according to the document which reviews a large number of matters involving a wide range of clients.

Acting as a nominee means acting in the name of someone so that the beneficial owner of the account is not disclosed. Banks providing services to customers have to establish who the ultimate beneficial owners of the funds they hold are. It is not being suggested that the banks would not have known who Blaydon was acting for.

Barclays Wealth Trustees “communicated they would no longer undertake this activity and the company [Blaydon] was moved to another service provider in January 2015”, according to the leaked document.

Appleby had “advised on the implications of acting as nominee for Denis O’Brien in relation to different assets”, according to the Barclays document in a note headed “Denis O’Brien structures”.

“On basis that structures do not do this by way of business, this was not a regulated activity. We have exited Blaydon Limited, which provided nominee bank accounts for DOB,” the note said.

Barclays was also to transfer out services being supplied to Baycliffe “as the client also wants it to provide nominee bank accounts and it was determined that it acted as nominee for third parties”.

The files show that Appleby was engaged to provide Barclays Wealth Trustees (Isle of Man) with Isle of Man regulatory advice in relation to Baycliffe and Blaydon and nominee agreements, in November 2015. Appleby has also provided legal advice in relation to Blaydon’s opening accounts with Bank of Ireland and Ulster Bank, with Blaydon having opened an account with the latter in 2011.

An invitation to a spokesman for Mr O’Brien to comment on matters to be covered in this report met with no response.

1 How long can Government afford to keep State pension age at 66?
2 How much will a Covid-19 vaccine cost?
3 Guinness brings out a non-alcoholic version of the black stuff
4 Farm lobby seeks EU ban on vegan ‘burger’ and veggie ‘sausage’
5 Frank Fitzgibbon stepping down as Sunday Times editor
Real news has value SUBSCRIBE