North’s ‘gin-preneurs’ are having a spirited Christmas 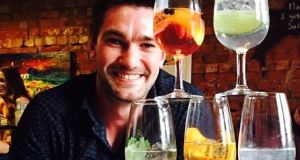 Gareth Irvine: “I started mixing flavours in kilner jars in my kitchen.”

Gareth Irvine is under intense pressure to get his Christmas present lists all wrapped up – and he could not be happier about it. The 24-year-old is toasting his first festive season in business with a bursting order book. “It’s bonkers,” says the Bangor-born entrepreneur who plans to increase production to meet the growing demand for his product.

Irvine is one of the North’s emerging “gin-preneurs” who have made 2016 a stand-out year for new, specialist gins with a distinct local taste.

For him, this could be his best Christmas ever. The founder of Copeland Spirits successfully raised £30,000 (€35,700) on the Crowdfunder website in the autumn to help launch his bespoke “gin fusions” range.

It is a marriage of local, signature ingredients – rhubarb and blackberry or raspberry and mint from the fields of Co Down – with a premium gin sourced specially by Irvine from Herman Jansen, a family-owned distillery in the Netherlands.

This time last year he was finishing up his business management degree at Ulster University and working in IT sales. Today he has given up the IT sales job and is busy making sure that all the Christmas orders for a growing number of local stockists and the last-minute online present orders are completed in time.

Irvine initially came up with the idea for his Copeland Gin as part of a university project. “I’ve always liked gin and I know a lot of people who also like to drink gin,” he says, “and it has such a presence on the shelf at the moment, so I started mixing flavours in kilner jars in my kitchen and experimenting from there.

“What’s really important to me is the flavours. There are a lot of farms round about me and I wanted my flavours to be local and traceable so I began working closely with all of the farmers in the area,” says Irvine.

“I thought at the start that this would just be a hobby that would take me to farmers’ markets at the weekends but it took off. Then I went to the banks to try and get funding and they just looked at me – a part-time student – and said no pretty much straight away. But thanks to crowd-funding, I am here today producing 400 bottles a week,” he adds.

The next step, aside from increasing production, is to expand his portfolio and start selling Copeland Gin outside of the North, with the Republic and Scotland first on his list of target markets. He may also seek further crowd-funding.

While Irvine decided to team up with a distillery in the Netherlands other new local gin-preneurs such as Gerry White, who launched his Belfast JawBox Gin, last February, are showcasing gin distilled on home soil.

Jawbox, which proclaims to be Ireland’s only single-estate gin, is produced at the Echlinville Distillery in Kircubbin, using their own water and homegrown grain, which is distilled in traditional copper pots.

Although Jawbox quickly developed a fan base across the island, it secured its biggest boost two months ago when it signed a retail deal with Marks & Spencer, which put it on the shelves of more than 150 stores.

White, who says the gin “embodies the spirit of Belfast – a big blast of juniper followed by the heat of pepper and then a clean lemon flavour” – is now eyeing up new markets in Europe and the United States for 2017.

He is likely to face stiff competition from another Northern Ireland newcomer – Boatyard Double Gin – which hails from the first legal distillery in Fermanagh in 120 years.

The Boatyard Distillery started production on the banks of Lough Erne in April. It is planning to open a new visitors’ centre next year which, according to Colin Neill, chief executive of industry group Hospitality Ulster, highlights part of the wider appeal and growing economic contribution from emerging artisan brewers and distillers in the North who are eager to create both a product and also attract fans to spend money where it originates.