The definition of ‘head office’: That Apple tax ruling explained 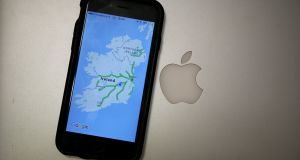 The EU has dismissed Ireland’s argument that the two Irish Apple subsidiaries at the heart of the investigation each had a ‘head office’ and ‘Irish branch’. Photograph: Niall Carson/PA Wire

The European Commission’s full decision on Apple’s tax affairs in Ireland came to 130 pages but doesn’t explain how it arrived at the €13 billion bill it ordered the iPhone and iPad maker to pay in back-taxes – not to mention interest.

Still, it does provide the kind of details that can’t help but liven up Christmas cocktail parties for accountants and lawyers all over Dublin this week. For everyone else, here’s our bluffer’s guide.

Firstly, how did the whole investigation get started?

Just over three weeks after Apple chief executive Tim Cook was grilled by a US Senate subcommittee over Apple’s tax affairs – in which he admitted the group had paid an effective tax rate of less than 2 per cent in Ireland over the previous decade – the European Commission was stirred into action.

The investigation turned formal in June 2014, when the commission made an initial ruling that Apple’s Irish tax arrangements were improperly designed to give the world’s biggest publicly listed company by value a financial boost in exchange for Irish jobs.

Brussels made its final ruling in August, when it outlined the massive amount of tax it says Apple owes Ireland – €13 billion. It formally published the decision in detail on Monday.

What does the case boil down to?

The entire case centres around two “tax rulings” the Revenue Commissioners gave Apple and its tax advisers in 1991 and 2007 over how ASI and AOE calculated the amount of profit subject to tax in Ireland.

These “rulings” (to use the commission’s language, as the Government says Revenue doesn’t have the authority to issue binding decisions) gave Apple a “selective” advantage, the commission said.

In 1991, for example, Revenue allowed ASI, which is responsible for buying Apple products from equipment makers around the world and selling them in Europe and elsewhere, to calculate the profit of its Irish branch at 12.5 per cent of all operating costs, excluding material for resale. But the remainder went to a “head office” within the same company in Ireland, which was deemed “nonresident” for tax purposes.

The ruling was modified in 2007 so that profit of the Irish branch was calculated at 10-15 per cent of branch operating costs.

AOE was similarly structured with an Irish branch subject to tax here, while the vast majority of profits were allocated to a “head office” that wasn’t tax resident anywhere.

What were the European Commission’s main problems?

For starters, the commission found that the way in which profits were split between ASI and AOE and their respective Irish branches was not along the “arm’s length principle” that would apply if products and services were being traded between unrelated company in the market.

The rulings resulted in lowering of ASI’s and AOE’s tax liability by “reducing” their annual taxable profits, giving the two companies an advantage over other businesses in Ireland.

The commission cited European Court of Justice rulings on products and services sold between units of one company. If the prices – what are known as “transfer pricing” – do not resemble prices that would have been set by the open market, it “confers a selective advantage” on the taxpayer.

The Government has argued against the commission’s use of the OECD’s general principles on transfer pricing as they are not written into Irish law. However, Brussels insists it has used the OECD guidelines as a benchmark. And besides, the “arm’s length” principle is enshrined the Treaty on the Functioning of the European Union.

Meanwhile, the EU dismisses Ireland’s argument that the two Irish Apple subsidiaries at the heart of the investigation each had a “head office” and “Irish branch”. It’s not like the assets of the same company can be split up, it said.

“Indeed, a creditor of such a company could have, as a guarantee, a possible claim on all the assets of the company in the event of its insolvency, irrespective of whether those assets have been allocated internally or for tax purposes to the company’s head office or to a particular branch,” the commission said.

“Accordingly, neither the head offices of ASI and AOE nor their respective Irish branches could be said to separately hold the Apple IP (intellectual property) licences.”

The commission claims that had Revenue done its homework, it would have found little or no evidence that the “head offices” of the Irish units carried out any activities relating to Apple IP.

ASI’s and AOE’s head offices had no physical presence or employees outside of Ireland during the period under investigation (2003-2014). With no staff, the only people in charge were the board of directors.

However, the commission found that the minutes of board meetings do not show that the directors performed “active and critical roles” in managing and controlling Apple’s intellectual property licences.

Therefore, the ASI and AOE “head offices” should never have been in any position to charge the Irish branches for the use of Apple IP, which served to lower the amount of taxable income in Ireland.