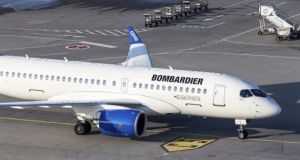 Bombardier’s Belfast workforce will be waiting anxiously this week to hear further details of how the Canadian group’s “turnaround plan” – which involves a further 7,000 job cuts worldwide – is taking off.

Alain Bellemare, Bombardier’s chief executive, together with other senior executives is scheduled to host an investor day on Thursday in New York where he intends to outline the “progress” of his turnaround plan and set the scene for 2017.

Two months ago the Canadian aerospace giant confirmed it was planning on making a further 7,500 redundancies worldwide.

From an estimated workforce of just under 5,000, it is already in the process of axing 1,080 jobs in Northern Ireland. Hundreds have already left with the remainder of those departing facing their last Christmas at Bombardier.

Davy Thompson, the regional co-ordinating officer with the trade union Unite, says the fact there has been no indication on how the latest redundancy programme will impact on Belfast means Bombardier workers are facing yet more uncertainty in 2017.

Last month Bombardier reported net losses of $94 million for quarter three and Bellemare has already disclosed that the Canadian group was on the “brink of bankruptcy” in 2015.

Christmas cheer is hard to manufacture when there is the prospect of a P45 arriving in your letterbox together with the cards at this time of year.

But Thompson says there also remains a strong determination locally to convince Bombardier that its Northern Ireland operations have an important part to play in its future.

Belfast specialises in the design and development of complex composite and metallic aerostructures and has a partnership role across all of Bombardier’s aircraft programmes.

Thompson says unions are prepared to “do what needs to be done” to co-operate with Bombardier.

He says despite obvious difficulties, which no one in the North underestimates, there is a strong belief that longer term the Canadian group will stabilise its business activities and overcome the current turbulence.

Thompson says that there are some early indicators that suggest the overall outlook for the group may improve despite the constant worries that its Northern workforce now have about their immediate short-term prospects.

Bombardier has been hinting that it may close yet another deal for its C Series jet before the end of the year – Belfast manufactures the primary structural components of the C Series aircraft composite wing so any positive developments in that respect are always welcome.

Last week, for example, the United Republic of Tanzania signed firm purchase agreements for two C Series 300 jets, which could be worth $203 million.

Belfast also designs and manufactures a number of components for Bombardier’s Global business aircraft family and its latest member – the Global 7000 – recently completed its successful maiden flight and is scheduled to enter service in 2018.

Thompson is hopeful that Northern Ireland’s participation across a wide range of Bombardier’s aircraft programmes will help to strengthen its bargaining ability to keep jobs in Belfast.

But he remains wary that the North is generally in an exposed position when it comes to manufacturing jobs because of the absence of a pro-active manufacturing strategy.

“We have seen major manufacturing job losses, around 6,000 in Northern Ireland, over the last two years and nothing has really been done about it. Earlier this year Unite and Manufacturing NI launched a campaign calling on the NI Executive to adopt an industrial strategy.

“We need to protect high value added manufacturing and we know high energy and transport costs are an issue but what we are doing about it?” Thompson says.

As he points out it is not just Bombardier where jobs are at risk as a result of its ongoing turnaround plan – there could also be thousands of additional jobs under threat in local firms that provide services or are approved suppliers to the aerospace group.

One of those is Acceptable Enterprises in Larne (AEL), a social enterprise that provides disadvantaged people with an opportunity to access training, further education and job opportunities.

According to David Hunter, chief executive of AEL, every day that programme provides someone with a job that is incredibly important to them.

“The benefit of a job is huge – it is much more than just about the money, it is about being involved and playing a part,” he says.

No one in Bombardier Belfast at this time would argue with that.