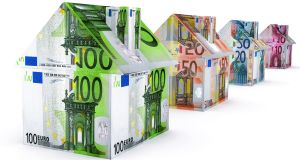 It could be the middle of next year before another 13 lenders communicate the final scale and cost of the regulator’s tracker examination. Photograph: Alex Slobodkin/ISPC

The Central Bank of Ireland tells us that 8,200 mortgage account holders were denied a tracker rate as per their contractual entitlement. This is the latest data available from its industry-wide examination which the regulator ordered in December 2015.

This number looks to be on the light side judging by what we already know from various lenders.

To recap, AIB told the Oireachtas Finance Committee last month that about 2,600 of its owner-occupier account holders were affected, and that about 14 of these could have lost their homes as a result of the bank’s failure. AIB has set aside €190 million to cover the costs of the tracker review.

Ulster Bank told the same committee that its figure was around 2,000, with 14 or 15 account holders losing their homes as a result of this error.

Last Friday, Bank of Ireland said 602 account holders had been denied a tracker, while another 3,916 had been overcharged on their tracker rate by on average 0.15 per cent.

Last year, Permanent TSB admitted a failure in connection with 1,372 accounts, including some customers of its then subsidiary Springboard. It was recently fined €4.5 million by the Central Bank for the Springboard failure.

PTSB has so far paid out €80 million in redress to those customers, and the expectation is that more cases might emerge in this examination.

That’s to say nothing of the other 11 lenders covered by this examination, including KBC Bank Ireland, the only other mortgage player left standing in the market.

Two lenders have found no cases requiring redress and have effectively dropped out of the examination. Leeds Building Society confirmed to Cantillon that it was one of them.

Not a lot of people know this, but Leeds has had a presence in Dublin since 2006. Its annual report for 2015 shows that it held just shy of £145 million worth of mortgages in the Republic at the year-end and generated a pre-tax profit of £3.3 million from its activities here.

For the other 13 lenders still in scope, it could be the middle of next year before they communicate the final scale and cost of the regulator’s tracker examination, which has highlighted serious deficiencies in the manner in which they dealt with their mortgage customers over a period of years.