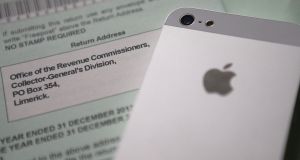 The commission’s legal argument rests on the structure at the heart of two Apple Inc subsidiaries – Apple Sales International and Apple Operations International. Both companies were divided into two parts – a “head office” and an “Irish branch”

As EU institutions were winding down this week for Christmas, the European Commission had one more announcement to disclose in the final days of 2016.

On Monday it published its full version of the controversial Apple ruling against Ireland, almost four months since it issued its negative finding on August 30th.

This time, however, the Irish Government was in the driving seat. The Department of Finance issued a pre-emptive statement overnight in a bid to control the narrative from Dublin’s perspective. The public relations strategy worked, with the news story dominating international coverage on Monday morning. Unlike the August announcement which saw competition commissioner Margrethe Vestager articulately set out the commission’s positions live across international media outlets, this time the contents of the full ruling was issued over email, with no press conference in Brussels.

Essentially, the full report sheds light on the key legal reasoning adopted by the commission in its finding against Ireland. Its legal argument rests on the structure at the heart of two Apple Inc subsidiaries – Apple Sales International (ASI) and Apple Operations International (AOI). Both companies were divided into two parts – a “head office” and “Irish branch”.

The commission argues that almost all of the sales profits derived from Apple’s international sales were attributed to the “head office” and not the “Irish branch”. Because the “head office” was not tax resident in Ireland it meant that Ireland could not charge Apple tax. However, the commission argues that the “head offices” only existed on paper, and the profits should have been allocated to the “Irish branches” as these were the only part of the companies that had operations in Ireland.

Further, it points out that corporate tax the world over operates by taxing where the value is created – it is not a tax on sales.

From Ireland’s perspective, the commission’s argument is flawed because Ireland could not have legally taxed the “head office” part of the two companies as they were not tax resident in Ireland.

Similarly, it argues that the OECD principles used by the commission to assess the transfer-pricing arrangements between the different parts of the company only came into existence in 2010, and in any event are non-binding.

Commission officials on Monday refuted this, arguing that a precedent exists in Belgian law, and using the OECD principles is standard practice.

As well as the commission’s core argument about the profit allocation and subsequent taxation implications of ASI and AOI, it has put forward an alternative line of reasoning to the court in the event that its main legal argument is not accepted. It notes that the Irish Revenue submitted 19 tax rulings to the commission as part of the Apple case, but that these show that the tax arrangements offered to Apple were not offered to the others.

The commission states that it “was unable to identify any consistent set of rules that generally apply on the basis of objective criteria to all non-resident companies operating through a branch in Ireland”.

The allegation of inconsistent application of tax rules on companies is a worrying development for Ireland. It also raises the obvious question of whether these other tax opinions will be subject to state-aid investigations.

Apple believes the commission essentially changed tack during the investigation and should have issued a fresh opening position, probably in spring 2015, in order to allow the third party and defendant to respond.

“The commission has shifted its theory over time to make the theory match a predetermined outcome,” one Brussels-based source said on Monday.

From the commission’s perspective, EU officials in Brussels on Monday reiterated the right of the EU’s state-aid division to investigate tax matters, arguing that it has been doing so since the 1950s.

However, they failed to address one of the inconsistencies at the heart of the commission’s investigation – despite ordering Ireland to recoup up to €13 billion in unpaid taxes, they have also said that other countries may also lay claim to some of those taxable profits. Again the commission said it was up to member states to pursue Apple for taxes they feel may belong to them, and already Italy has made a settlement with the company directly.

Whether further countries step forward, and whether this might significantly dent the final figure due by the company to Ireland, is likely to emerge in the coming months.

7 Dark economic clouds foreshadow the storm yet to come