No oral hearings over works at Trump’s Doonbeg resort 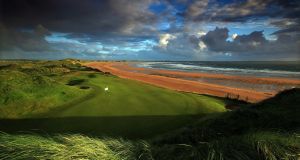 Objectors to the plans for Donald Trump’s Doonbeg resort to build coastal protection works are to miss out on challenging it at a public planning forum as An Bord Pleanála had decided not to hold an oral hearing.

In a letter to all concerned parties, the board said: “The board has concluded that the appeal can be dealt with adequately through written procedures.”

Joe Russell , general manager at the resort, said on Wednesday: “As there is no oral hearing, it appears that An Bord Pleanála has sufficient information to make a decision. An early decision would be helpful to the company.”

It is now more than 2½ years since the resort first lodged the plan.

In December 2017 Clare County Council gave it the go-ahead for 38,000 tonnes of rock to be placed in front of the course at Doughmore beach. The club said at the time that a “do-nothing scenario will bring the viability of the entire resort and its potential closure into question”.

The council’s decision was appealed to An Bord Pleanála by a number of parties, including An Taisce .

Others to appeal the decision include the Save the Waves Coalition based in California; environmentalist Peter Sweetman; Longford man Liam Madden; and two Clare-based groups, Lahinch’s West Coast Surf Club and the Miltown Malbay-based community group Save Doughmore.

The appeals board adjudicating on the appeal was held up for a number of months last year over a legal challenge.

The club has told the board if the natural erosion process is allowed to continue it would result in a loss of 36 per cent of the dune habitat over a 50-year period.

Consultants for the club state that “the execution of golf hole retreat has gone hand in hand with the planning of coastal defence”.

Separately, a Trump Doonbeg plan for a €40 million development at the golf resort remains on hold. The development incorporates 53 holiday cottages, a ballroom/function room, leisure centre and a new restaurant.