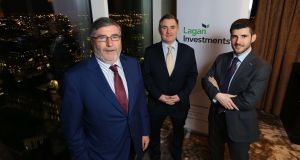 Belfast construction entrepreneur Kevin Lagan has acquired a majority stake in a UK manufacturer of timber frame structures for an undisclosed sum.

Mr Lagan bought the stake in Frame-Tech through his investment vehicle, Lagan Investments, which he established after selling his building materials company for £455 million (€510 million) in 2018.

Frame-Tech, which manufactures more than 1,000 residential units per year, had earnings of £3 million for the year ended June 30th and turnover of about £13 million. The deal is expected to to create synergies with Mr Lagan’s FastHouse operation, which specialises in the rapid construction of homes.

FastHouse recently completed 466 holiday homes for the Center Parcs resort in Co Longford in just 34 weeks. Its factory produced five houses a day for the development.

“The acquisition of Frame-Tech provides us with the opportunity to expand our timber frame representation into the North of England, ” said Peter Lagan, director of Lagan Investments.

“Given the ever-increasing demand for off-site manufacturing, and the need to address the shortage of homes throughout the UK and Ireland, we intend to collectively grow our market share and consider further acquisition opportunities,” he added.

Founded in 2008, Frame-Tech employs about 60 staff and operates primarily in the north of England. The company’s managing director, Jamie Atkinson, said the investment by Lagan Investments will allow the business expand both its product offering and geographical coverage.

FastHouse, meanwhile, was established in 2015, three years before Mr Lagan sold his group’s building materials business to British company Breedon for £455 million. He retained some of his company’s other operations, including its housebuilding division, which also plans to expand next year.

The company recently said increasing demand for its products, which has seen it build up a sales pipeline of more than €22 million, had prompted it to invest £2.5 million (€2.78 million) in a fourth production line.