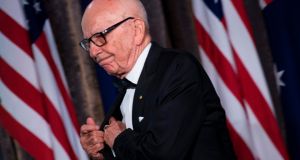 News Corp has moved closer to gaining a foothold in Australia’s free-to-air television market following a decision by competition authorities to clear the proposed purchase of Ten Network by a consortium led by Lachlan Murdoch.

The Australian Competition and Consumer Commission said on Thursday the acquisition was unlikely to result in a “substantial lessening of competition”, although it conceded a deal would reduce media diversity due to the expansion of “Murdoch interests” in Australian media.

“While the transaction will result in some reduction in diversity across [the] Australian media landscape, we have concluded it would not substantially lessen competition, which is the test the ACCC is required to assess acquisitions against,” said Rod Sims, ACCC chairman.

The Australian decision comes as Rupert Murdoch’s 21st Century Fox faces scrutiny by UK authorities over whether its £11.7bn bid to buy BSkyB would hand the media mogul too much power over the British media.

Lachlan Murdoch, co-chairman of News Corp and son of Rupert, has made a joint bid to buy Ten Network along with Bruce Gordon, an Australian media mogul who owns WIN and a stake in Nine Entertainment, which are competing free-to-air television networks.

Both parties are shareholders in Ten, which has struggled to build audience share and was placed in administration last month when its wealthy backers — including Mr Murdoch, Mr Gordon and James Packer — withdrew their support for a loan guarantee.

The consortium’s proposed purchased of Ten still requires Australia’s parliament to pass a government media bill, which is due to be voted on within weeks. Under existing rules companies are only allowed to own two out of the three main forms of traditional media — radio, television and newspapers — to cultivate diversity in ownership and views offered.

The government has been pressing independent senators to back the bill, arguing it is the only way to save Ten. It says the “two out of three” rules are redundant due to the greater diversity of media provided by internet news providers and competition from Google and Facebook.

But the opposition Labor and Green parties oppose the bill and have blocked attempts to get the bill through the Senate.