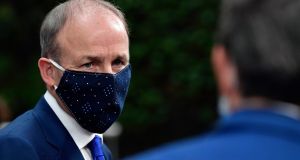 Taoiseach Micheál Martin said he feared that the EU summit was moving towards cutting the €750 billion rescue package as talks entered a third day.

Mr Martin told The Irish Times he feared the “direction of travel” was to cut the size of the proposed recovery package, reducing the €500 billion the European Commission has proposed to borrow and hand out in grants focused on the hardest-hit member states, avoiding the need for heavily indebted national governments to borrow more. The remaining €250 billion would be distributed in the form of loans.

“Ireland believes that pouring more debt on debt is not the way out of this. And some member states find this quite difficult. The grants element of this is very important,” Mr Martin said.

“One has to make an assessment in some stage of the process if the package is diluted too much, does it represent the significant response that chancellor [Angela] Merkel and president [Emmanuel] Macron originally envisaged?”

In the background, diplomats are assessing how to buy more time to break the deadlock, with next weekend and the following one possibilities for leaders to meet again for talks.

But some national leaders including Slovenian prime minister Janez Janša favour remaining in Brussels until a deal is reached, no matter how long it takes.

“Hope is the last to die,” Mr Janša told journalists.

The national leaders are driven to keep going by an awareness of how high the stakes are. Some fear that a failure to reach a deal could spook financial markets and trigger a debt crisis or worsened recession, and that it’s vital for the EU to demonstrate its ability to act in times of crisis to stop citizens from becoming disillusioned with the project.

“I sincerely hope that today we can break the deadlock,” said Greek prime minister Kyriakos Mitsotakis.

“We are facing an unprecedented economic crisis and we simply cannot afford to either appear divided or weak.”

Speaking on Sunday, German chancellor Angela Merkel warned that European Union leaders may not reach a deal on a coronavirus stimulus plan on Sunday as marathon negotiations ran into a third day with rising acrimony over the size of the package and conditions tied to the recovery funds.

Germany and France have led efforts to reach a deal on a €1.8 trillion budget and economic recovery package they argue is essential to counter a recession forecast to be the worst in a century and prevent tipping weaker EU states into a debt spiral.

After two exhausting days of negotiations, a so-called “frugal” group of northern, richer states led by the Netherlands appeared no more willing to back down from demands for cuts to the package.

“I still cannot say whether a solution will be found. There is a lot of goodwill, but also many positions,” Dr Merkel said in Brussels. “I will do my part in this. But it is also possible that there will be no result today.”

Heated debates ran late into the night on Saturday, focused on a demand by Dutch prime minister Mark Rutte that recovery funds should be held back from member states that do not follow the rule of law, which is fiercely resisted by Hungary where the right-wing nationalist government is accused of eroding media and judicial independence.

“If the deal is blocked it’s not because of me but because of the Dutch guy, because he initiated something,” Mr Orbán told reporters on Sunday. “I don’t like the blame game, but the Dutch man is the real responsible man for the whole mess we have.”

47,000 homes need to be built each year to solve housing crisis, report says 12:00
Lenovo sails past expectations with 31% first-quarter profit jump 11:05
It was business, it was personal: the Redstones’ father-daughter feud 10:36
Facebook launches hub to help users with US poll information 09:07
Microsoft returns to mobile market with Surface Duo 08:51

1 Jervis shopping centre takes major tenants to court over rent disputes
2 Seán FitzPatrick makes fresh bid to secure planning for new Greystones home
3 Energia’s owner ‘plans to sell it later this year’ in deal worth €2bn
4 Dogpatch Labs and SOSV shortlisted to win NDRC contract
5 Digital pollution: ‘We have a pandemic of data and 90% of it is crap’
6 It was business, it was personal: the Redstones’ father-daughter feud
7 47,000 homes need to be built each year to solve housing crisis, report says
8 Microsoft returns to mobile market with Surface Duo
9 Aryzta’s pick for chairman faces opposition from investors
10 Moving in and out of lockdown is a recipe for economic disaster
Real news has value SUBSCRIBE