Project will ‘prepare the way for the construction phase’, EU says 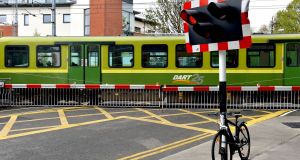 Support for expansion of the Dart line came under a €2.2 billion investment round from the EU which will support 140 key transport projects.

The State will receive more than €8.8 million in grant aid from the European Union to spend on studies to expand the Dart into Kildare.

Support for expansion of the Dart line came under a €2.2 billion investment round from the EU which will support 140 key transport projects. It was provided under the Connecting Europe Facility (CEF), the EU’s grant scheme supporting transport infrastructure.

To receive the funding, the projects must have been designed to help build missing transport links, support sustainable transport and create jobs.

“Dart expansion will provide more frequent and sustainable transport options to citizens living in the greater Dublin area, and encourage a shift from private cars to public transport,” the EU said in outlining the projects that were selected.

“The project increases train frequency and capacity, as well as better linkages with other transport modes. This is expected to have a positive impact on employment, congestion and sustainability.”

The grant aid will fund studies examining electrification, resignalling, provisions for new and upgraded stations and bridge replacement along the Kildare line, “preparing the way for the construction phase”.

The project that received the highest amount of funding by some distance in this round was the modernisation of the Pardubice railway junction near one of the largest railway stations in the Czech Republic.

“The €2.2 billion EU contribution to this crucial transport infrastructure will help kick-start the recovery, and we expect it to generate €5 billion in investments,” said transport commissioner Adina Valean.

“The type of projects we invest in ranges from inland waterways transport to multimodal connections, alternative fuels to massive railroad infrastructure,” she added.

The projects were selected for funding through two competitive calls for proposals launched last October.

Between 2014 and 2020 under the CEF beneficiaries in the Republic participated in 26 projects and received €107 million in co-funding.

1 Moving in and out of lockdown is a recipe for economic disaster
2 Ivana Bacik opposes Bartra’s Ballsbridge shared co-living plan
3 UK criticised for ‘unforced errors’ on post-Brexit trade deals
4 Aryzta’s move to replace chairman prompts takeover speculation
5 Brown Thomas and Arnotts to cut 15% of jobs due to coronavirus crisis
6 Stripe lures Dhivya Suryadevara from General Motors to be CFO
7 US treasury forced to pay up to fund record stimulus
8 What will the office market look like after the great remote working experiment?
9 How Tony Buzan used mind maps to doodle his way to millions
10 ‘There’s something quite exotic for me still about Asia’
Real news has value SUBSCRIBE