Will RTÉ ‘evolve’ beyond the need for RTÉ2? 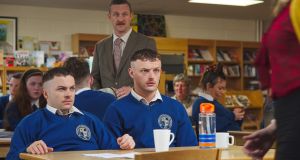 The Young Offenders: the second season of the comedy is now showing on RTÉ2. Photograph: Miki Barlok

One flagged move in RTÉ’s mission to “evolve” and make €60 million worth of cutbacks over three years sounded innocuous, like a common-sense technicality. The broadcaster will shift its “biggest sporting moments” to RTÉ One, it said. But it’s a change with a potentially dramatic denouement for RTÉ2, the channel previously known as RTÉ Two, Network 2 and, um, N2.

Sport is the oxygen of the channel. In September this year, its 10 most-watched programmes were entirely composed of sport, courtesy of the All-Ireland, the Rugby World Cup and a Euro 2020 qualifier. But the top four of these (the replay of the All-Ireland Senior Football final, the “first” final, and the post-match coverage for both) weren’t just the most popular programmes on RTÉ2, they headed the chart across RTÉ that month, edging RTÉ One’s Room to Improve into fifth place.

It’s easy to see how the current RTÉ policy of reserving these “biggest sporting moments” for RTÉ2 can seem like an anomaly. After all, the BBC wouldn’t stick an England match on BBC Two unless it absolutely had to do so.

Some sport events will be more moveable to RTÉ One than others. On weekends, there are fewer schedule obstacles than there would be from Monday to Friday. Last night’s Euro 2020 qualifier between the Republic of Ireland and Denmark, for instance, couldn’t have been shown on RTÉ One without disrupting the audiences for news or EastEnders.

But sport – the sport that RTÉ has managed to hold on to in an era of more competitive rights bidding – is more vital than ever to the organisation. And amid a lacklustre environment for television advertising, there is a logic to the broadcaster doubling down on RTÉ One, its biggest revenue generator.

The flipside is that a dilution of RTÉ2 as the home of sport within RTÉ really does threaten to unravel it as a proper “destination” channel. Its sport-light months can be threadbare. RTÉ2 can post an 8 per cent-plus share of viewing in the summer months, and will do double-digits when there’s an international football tournament on, but by the time its other highlights have been used up over the winter and we get to April, its share tends to drop below 5 per cent.

Virgin Media One (the former TV3 channel) now has a firm grip on its place as the second most-watched channel and it’s not ridiculous to envisage Virgin Media Two (the ex-3e) closing the gap on RTÉ2 in some quiet month.

RTÉ2 already seems like a less vibrant channel than it did even at the start of 2015, when I last devoted this column to its reliance on sport plus the fact that the Father Ted Christmas special from 1996 was then still unerringly the channel’s most-watched programme every December.

Two things were happening at the time. Under its then newish controller Bill Malone, RTÉ2 had been commissioning a string of cheap or cheapish programmes in a bid to give the channel a peak-time identity beyond sport and cater to the 15-34-year-old audience that was slipping out of RTÉ’s grasp.

The second thing was that the BBC was thinking about making youth-oriented BBC Three into a digital-only affair in a move that was more triggered by cost-cutting than it was inspired by the evolution in TV consumption habits. “It is easy to see the same on-demand thinking being applied to RTÉ 2, eventually,” I wrote at the time.

If RTÉ was to pocket the transmission costs and go the full BBC Three (which ceased to be a linear channel in 2016) on RTÉ2, it would lose a chunk of advertising money – though it seems notable that the commercial revenue generated by all of RTÉ2 in 2018 was only two-thirds of its outlay on sport.

Pressed on Morning Ireland by Bryan Dobson about whether transferring certain sports events to RTÉ One was a prelude to the winding down of RTÉ2, the broadcaster’s director-general Dee Forbes replied “absolutely not”. But she also revealed that what RTÉ wants is for the channel to become “a window” to the RTÉ Player.

Not all channels are created equal. If RTÉ consolidates around RTÉ One, RTÉ2 will inevitably be rendered a more peripheral concern

Since Malone decamped in 2016 to TV3 Group/Virgin Media Television, where he oversees all its content, RTÉ2 hasn’t had a channel controller in its own right. The short-lived controller role was swept away for all channels in a Forbes-led restructuring that also spelled the official end of the RTÉ Television division (it's Audience, Channels and Marketing now) and created a new set of job titles.

The channel remains home to shows that appeal to a younger, if not always young, demographic, with occasional standouts like The Young Offenders (“made for BBC Three in association with RTÉ”) performing well on the RTÉ Player. But the kind of programmes that would once have been destined solely for RTÉ2 are these days either swiftly repeated on RTÉ One or, like the Amy Huberman vehicle Finding Joy, head straight there.

Given other broadcasters are still in the business of launching channels (Sky Crime debuted last month and will be followed by Sky Comedy in February), it would be harsh on one level were an axe to take out RTÉ2. But RTÉ doesn’t have to completely pull the plug on RTÉ2 to demote it.

Not all channels are created equal. If RTÉ consolidates around RTÉ One, RTÉ2 will inevitably be rendered a more peripheral concern, with imports, repeats and a smattering of modestly watched commissions scarcely making up for the raiding of its sporting jewels.

1 Why is Germany suddenly embracing its inner Keynesian?
2 Passengers face queuing in car parks at Dublin Airport
3 Major credit union plans to limit savings accounts to €40,000
4 Tesla’s Elon Musk calls for breakup of Amazon in tweet
5 Tesco to cut emissions by converting waste food from Irish stores to gas
6 Brother is dragging his heels as executor of uncle’s will - is there anything I can do?
7 Ikea among major retailers to reopen next week
8 In six months we will be in the grip of a 1980s-style recession
9 Student accommodation sector set for harsh Covid-19 lesson
10 Revenue tells court it was entitled to raise €1.64bn tax assessment against Perrigo
Real news has value SUBSCRIBE