Must voters accept lies on Facebook? Oh honey, no they don’t 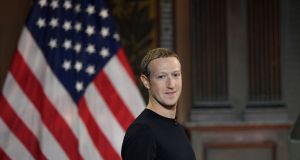 What’s on your mind? Facebook asks its users this every time they check in. Dearest revenue-generating-unit, what gives? Any content for us today? Let us fill the void by recycling some “memories” of that time you posted something in 2012, when we felt you loved us more, but our share price was a mere fifth of what it is now.

Facebook has been sharing its own thoughts more than usual lately, notably in the vicinity of Washington DC, and the results have not been pretty.

In the latest salvo in the battle for the right to profit from weaponised lies, chief executive Mark Zuckerberg told the Washington Post that Facebook would be permitting disinformation in political ads because tensions surrounding “an erosion of truth” were “something we have to live with”.

The most succinct quote-tweet response to this startlingly sanguine conclusion came from actor-turned-politician Cynthia Nixon: “Oh honey, no we don’t”.

The Facebook founder’s interview coincided with a Georgetown University speech in which he advanced a daringly revisionist origin story for his social media creation. If the platform’s “diverse perspectives” had only existed at the time of the US invasion of Iraq in 2003, then maybe the Iraq war wouldn’t have happened.

“I remember feeling that if more people had a voice to share their experiences, maybe things would have gone differently,” he posited to his captive student audience. These years of “disbelief” shaped his conviction that “giving everyone a voice empowers the powerless and pushes society to be better over time”.

This might be a fine argument in support of freedom of expression, were it not for, well, everything that has happened since. To give just one inconvenient example, Facebook categorically did not empower the powerless of Myanmar when its platform played a role, according to a UN report, in inciting a genocide against the Rohingya people.

Then there’s the fact that Zuckerberg actually set up Facebook in 2004 as a means to rate the attractiveness of women students at Harvard. It was less of an opinion gauge on US foreign affairs, more of a “hot or not” poll.

For a website best known in its early years for “pokes”, personality tests and Zynga games, it’s quite the bold suggestion that its regular non-paying users could have been any match for the political machine that delivered the infamous “weapons of mass destruction” justification for war.

Indeed, under the new “disinformation welcome” policy, the US-UK governments could have exploited Facebook to garner public support for their dubious pre-war lines on those elusive WMDs. You would have to be a raving technophile to believe that if the millions who marched against the war had only had Facebook, the whole business could have been avoided.

To some, Zuckerberg’s stance will be rendered plausible by its dash of uncomfortable truth: few people fancy the thought of Facebook having the power to vet every single political ad. Forgetting about the concept of third-party regulation, they decide he must be right to make no interventions at all.

But the ads that prompted this latest outcry notably haven’t revolved around subjective interpretations, debatable semantics or split hairs. They instead concern the unsubstantiated Trump campaign accusations against former vice-president Joe Biden. While broadcasters CNN and NBCUniversal refused to run it, qualm-free Facebook declined to remove it, in effect admitting that algorithmically rewarded disinformation is a feature, not a bug, of its business model. It’s democracy, Joe, but not as we know it.

Into this absurd “lies are fine now” era, it has fallen to US senator and Biden’s rival for the Democrat presidential candidacy Elizabeth Warren to demonstrate one obvious flaw. Facebook’s policy can be turned against itself.

“Breaking news: Mark Zuckerberg and Facebook just endorsed Donald Trump for re-election,” a recent Warren for President ad began, before rather kindly explaining that this wasn’t true, it was just that the tech giant had given Trump “free rein to lie” and was cashing his cheques.

Has Facebook got this far by being considerably more reluctant than major broadcasting networks to turn down money? Or has it decided that as it is a bit costly to manage the sheer scale of the precisely targeted lies and disinformation on its platform, it might as well say it doesn’t want to “censor” politicians?

Because if Facebook is too big to stay honest, then this only adds further legitimacy to Warren’s campaign for it to be broken up.

These are full days for Zuckerberg. Next week, Facebook releases its third-quarter earnings. Despite a string of scandals, the figures are expected to show further double-digit expansion in revenues.

US government scrutiny of Facebook, however, is now looking remarkably European in its seriousness. On Wednesday, Zuckerberg is heading to Capitol Hill for a committee hearing titled “an examination of Facebook and its impact on the financial services and housing sectors”, which will likely zero in on its ambitions for the libra cryptocurrency to which multiple payment providers have already said “oh, honey no”.

Earlier this year, he and his wife also found the time to recommend several potential hires to the presidential campaign of another Democrat candidate, Pete Buttigieg, Bloomberg reported on Monday. Whatever happens in November 2020, it’s hard to see how the next year of campaign spending won’t be brilliant for Facebook’s earnings.

Meanwhile, despite its most fervent efforts to prevent them, wars still happen.