What the papers say: Fitzgerald buys Bruxelles and an end to negative equity 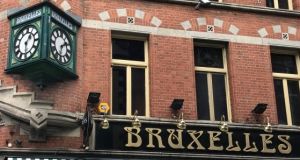 Developer Noel Smyth is planning to bring more than €100 million worth of new residential developments to the rental sector, according to the Sunday Independent.

The newspaper reports that developer Fitzwilliam Real Estate Capital is looking to erect 400 “build-to-rent” units across four sites in Dublin. It adds that Richard Barrett’s Bartra Capital has also lodged plans for 725 bedspaces at a Tallaght development.

Staying with property, the same publication claims Louis Fitzgerald has bought famous Harry Street hostelry Bruxelles for an estimated €10 million after making unsuccessful bids to acquire The Old Stand and Davy Byrnes. Mr Fitzgerald and his family own 21 pubs across the Republic with the hospitality veteran reportedly ruling out a bid for Copper Face Jacks, which was recently put up for sale.

The newspaper also reports that all Irish homeowners will emerge from negative equity by 2020. The director of Ibec’s Property Industry Ireland, David Duffy, is quoted as saying a combination of rising house prices and homeowners paying down debt means there are far fewer people in negative equity than was the case previously.

The Sunday Times Irish edition leads with a report that the family who control Nolan Transport are suing its former solicitor and financial adviser over claims they have been defrauded of €7 million. Nolan Transport is among the largest trucking firms in the Republic with a fleet of 450 tractor units and 1,100 trailers. It is based in New Ross, Co Wexford.

Elsewhere, Glanbia managing director Siobhán Talbot is to be granted shares worth €2.4 million under the company’s long-term incentive plan, according to the same paper. The stock will be forthcoming if she hits performance targets under the company’s 2018 plan. Ms Talbot recently agreed a three-year contract extension to remain as the dairy giant’s managing director.

Meanwhile, more than €50 billion was repatriated to the United States by Irish entities last year, reports the Sunday Business Post. It cites US treasury department figures which indicate a decline in treasury bills by Irish-based holders from $327.7 billion (€290 billion) to $2701.1 billion in 2018.

The newspaper also states that Petroceltic – the former Irish-owned oil exploration company acquired by Angelo Moskov in 2016 – has awarded Petrofac a $1 billion contract to develop its Ain Tsila gas field in Algeria. Mr Moskov bought Petroceltic out of examinership in 2016 for between €7 million and €10 million three years ago.

All the Sunday broadsheets carry the news that energy services company Crowley Carbon intends to create 50 jobs in Co Wicklow as part of a €10 million investment.