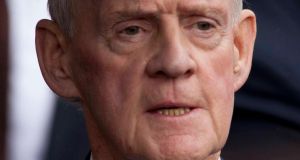 The accounts of Larry Goodman’s ABP Foods Group in Ireland are shielded from public view under its unlimited status.

Returns were recently filed for Parlesse Investments and Silverbirch Investments, which are closely connected to Mr Goodman’s ABP Foods Group.

Although they cover the period only until the end of 2016, the documents nonetheless provide an insight into the financial scale of ABP, the accounts of which in Ireland are shielded from public view under its unlimited status.

Silverbirch, which mostly provides financing to other parts of the ABP empire, had assets of just below €1 billion while Parlesse’s accounts, filed in January, show assets of just above this amount. The combined assets of both companies grew by more than €160 million over the year.

Parlesse, according to its documents, made a profit for the year of about €64 million, which was more than treble the amount it made the previous year. The company’s accounts show a charge of €165,000 for “income tax”.

Parlesse, which was registered in Luxembourg less than a decade ago, now has accumulated profits of more than €406 million. It owns shares in other ABP-connected businesses with a book value of €700 million and has granted loans worth almost €300 million.

Parlesse owns other Goodman-connected companies in Holland, as well as the unlimited Tubriz, which is registered in Ireland to Mr Goodman’s Louth base. Although Tubriz filed no public accounts in this State, Parlesse’s figures show it has net equity of almost €300 million and makes profits of €15 million.

Meanwhile, Silverbirch’s assets include shares with a book value of about €408 million. It made a profit for the year of €7.5 million and has accumulated gains of almost €24 million.

Silverbirch has loaned at least €268 million to other group companies, according to its accounts. It has taken out bank loans of about €43.5 million. The company has zero staff, according to the documents.

ABP Foods declined to comment last night on the accounts for Parlesse and Silverbirch. ABP is one of Europe’s biggest food processors, and is a major player in the meat processing sectors in Ireland and Britain.

The Irish beef sector, for which ABP processes much of the output, is heavily exposed to Brexit. A schedule of proposed tariffs published by the UK government this week suggest that Irish beef exports would be badly hit in the event of a no-deal Brexit.