TV productions shot in Ireland employed more than 1,000 people between them last year 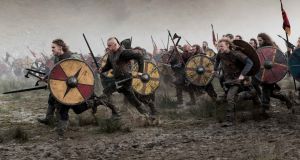 Vikings is filmed in Co Wicklow.

Two major international TV productions shot in the Republic, Vikings and Into The Badlands last year paid out combined wages to stars and crew of €36.5 million.

Underlining the spin-off to the economies of Wicklow and Dublin from productions availing of tax credits from the State, the amount paid to staff and crew for the sixth and final series of Vikings totalled €16.58 million.

New accounts for VK Six Productions DAC show that 637 staff shared the €16.58 million payout in the 12 months to the end of April last.

The staff members were made up of 400 extras, 228 stunt people and other crew members along with nine engaged in finance, clerical and administration.

Work on the production continued until November at Ashford Studios in Co Wicklow.

The firm’s total production expenses for the year came to €57.4 million.

Earlier this year, the Revenue Commissioners confirmed that Vikings and Into the Badlands each qualified for tax credits in the €10 million-€30 million bracket last year.

According to accounts filed for Badlands Three TV Productions, it paid out €20 million in wages to 540 employees in the 12 months to the end of April last.

The filming of Vikings at Ashford Studios provided a massive boost to the company since 2012 with it recording a 32 per cent increase in profits to €2.1 million in 2017.

The company has recently secured planning permission for a €90 million facility that will allow it to cater for a number of large productions at the same time.