Jessy & Nessy, about exploring ‘life’s curiosities’, will be on Amazon Prime Video by end of 2019 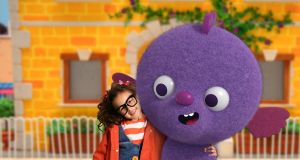 A new preschool animation series created by Irish company Jam Media will launch on Amazon Prime Video at the end of this year, with new episodes released into 2020 and 2021.

Jessy & Nessy, created by Jam’s Chris Dicker, is a co-production between Jam Media and Amazon Studios, the content arm of the tech and media giant.

The mixed-media animation, with 40 episodes of 11 minutes’ duration, is executive produced by Jam chief executive John Rice and co-founder Alan Shannon, with Michelle Sullivan as the executive in charge for Amazon. Emmy winner Peter K Hirsch is its head writer.

The show centres on inquisitive, fun-loving six-year-old Jessy, “who happens to see the world a little differently through her magical glasses”, or as she calls them, her “inspectacles”.

They allow Jessy to see and talk to all types of animated characters, including Nessy, who lives in a fountain opposite Jessy’s apartment building. Together, Jessy & Nessy “explore life’s curiosities”.

“We are really excited to be partnered with Amazon Studios on this new property,” said Mr Rice. “We want to encourage children to be curious and learn about the world around them, and Jessy & Nessy make the perfect best friends to explore all of life’s wonders with.”

“With its unique characters, colourful locations and mixed-media format, this show invites our preschool audience to tap into their innate curiosity and harness their imaginative spirit of wonder.”

Jam, which is based in both Dublin and Belfast, was set up in 2002 by animator friends Rice, Shannon and Mark Cumberton.