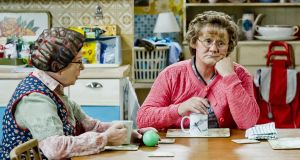 Mrs Brown’s Boys has dramatically boosted the fortunes of its creator and lead actor, Brendan O’Carroll

BOC-PIX Ltd also saw its cash pile increase by more than €1.2 million last year as the popularity of the comedy franchise was maintained in the Republic, the UK, and elsewhere across the globe.

The company is owned by Mr O’Carroll (61) and his wife, Jennifer Gibney (53), who stars in the show as Cathy, the daughter of her real-life husband’s character, Agnes Brown.

New accounts for the firm show that cash reserves rose by €1.26 million during the 12-month period to the end of last August, standing at €1.79 million at the end of the financial year.

Separate accounts for another company co-owned by the comedy couple, Mrs Brown’s Boys Ltd, reveal further profits arising from the success of the television and film franchise.

In accounts for the year ending December 31st, 2015, Mrs Brown’s Boys Ltd had accumulated profits of nearly €1.7 million and a cash pile of more than €1 million.

The success of the show on stage and television led to a film adaptation, Mrs Brown’s Boys D’Movie, which took more than €6 million at the UK and Irish box office in the weekend following its release in June 2014.

Its popularity has also grown in other locations, and it is now broadcast in countries such as the United States, Canada, Iceland, New Zealand, and South Africa. The show has also garnered almost one million viewers in Australia.