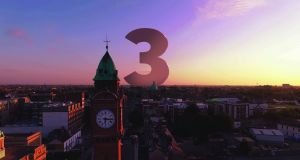 Image from a TV3 marketing campaign for the group in January 2017, when it launched its “three-channel strategy”.

A plan to rebrand TV3 Group’s channels in the second quarter has been deferred by the broadcaster and its owner Virgin Media Ireland.

TV3, which was bought by Virgin Media for €80 million in July 2015, had been in the final stages of preparing a rebrand of its three channels to reflect the name of its parent company.

However, TV3 confirmed that the move was not the “key focus” for the business at present.

“The planned TV3 rebrand has been deferred due to the number of significant business priorities both businesses are focused on delivering in 2018,” TV3 told The Irish Times.

“Maintaining the strong momentum from our exciting new content, such as NatWest Six Nations and Ireland’s Got Talent, has resulted in TV3 channel viewership rising by 23 per cent year-on-year and is the key focus for the TV business at present,” it said.

While TV3 Group had previously indicated that its corporate name would change to Virgin Media Television Group later this year, the channels were to be given new names early in the second quarter of 2018. This was expected to take place only weeks after the conclusion of the Six Nations rugby championship, to which TV3 has the rights for the first time.

It is understood that VM1, VM2 and VM3 were the proposed new names for the channels, replacing TV3, 3e and Be3.

The plan was first mooted in public by Virgin Media Ireland chief executive Tony Hanway in an interview with The Irish Times last November, in which he said it had been “on the agenda for quite some time”. It was later confirmed by both Mike Fries, who is chief executive of Virgin’s parent Liberty Global, and TV3 Group managing director Pat Kiely.

It is not known if any new date has been earmarked for the rebranding. Under the original plan, the TV3 channel’s name would have changed up to five months ahead of its 20th anniversary on air, which it will celebrate on September 20th.

TV3 Group’s last rebranding exercise was only 14 months ago. In January 2017, it renamed its acquisition UTV Ireland as Be3, while it also made cosmetic changes to the branding for TV3 and the group’s second channel 3e at this time, adopting the slogan “the power of three”.